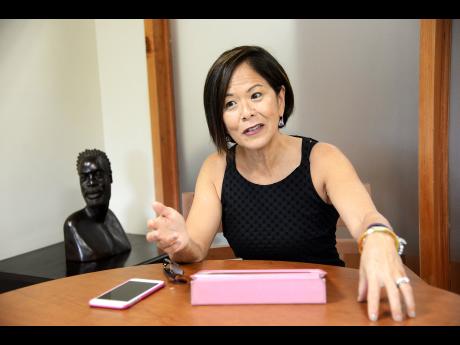 Gladstone Taylor
Donnette Chin-Loy Chang explains how she got involved in charity work.

"Real joy comes not from ease or riches or from the praise of men, but from doing something worthwhile."

That is the mantra by which Donnette Chin-Loy Chang has lived her life. She has had extensive careers in media, communications and public relations, both in Jamaica and Canada. And for all both countries have given her, she has tried to show even her gratitude.

She is co-chair of Food For The Poor Canada (FFPC); is a member of the dean's advisory for community services at Ryerson University; and co-patron and major benefactor for the past seven years for the University of the West Indies (UWI) Toronto Benefit Gala (the largest fundraiser for the university in Canada).

She's also a major donor to the UWI, Mona and gives support to several Jamaican high-school alumni projects. But she doesn't like the word 'philanthropist'. Her late husband, Jamaican-Canadian businessman G. Raymond Chang, was perennially termed as such. She prefers another term.

"To my mind, he was one of the world's greatest 'do-gooders'," she said. "Together we shared a vision of how we saw the world. And that vision was always about making sure that the people around you were comfortable. When you can assist, you do. And you don't talk about it." Together they embarked on various initiatives, focusing on mostly health, education and the environment (the latter mostly in Canada).

"They (these sectors) are critical to the life of any human being," she said. "We always believed that education levels the playing field. It is the springboard for people. It's not just about getting a degree ... it's about learning how to think critically."

Chin-Loy Chang heavily supports the University Health Network, a group of four hospitals in Ontario, in partnership with the Dr Herbert Ho Ping Kong (another Jamaica-born Canadian) Centre for Excellence in Education. She credits her parents with instilling the 'giving' mindset.

"I've always watched how my parents treated people ... and not just to help financially, but to support their endeavours and to give encouragement," she said. "My parents were mentors at the time when the word wasn't so thrown around."

The Kingston-born Chin-Loy Chang left Jamaica at 17 to attend Ryerson and went on to the Canadian Broadcasting Corporation (CBC) where she excelled, working in various positions including reporter, producer and announcer for CBC Radio local and international services.

Other career highlights include being a consultant with leading US public relations firm Ruder Finn and Rotman. The client? Jamaica. In 1987, she headed the radio arm of the Jamaica Information Service. Chin-Loy Chang also trained journalists in several English-speaking Caribbean countries and Haiti and was a visiting lecturer at the University of the West Indies at Carimac. She returned to Canada around 2000,where her charity work really blossomed.

One recent Jamaican project was building the Lloyd's Basic School in St Thomas, a project undertaken by FFPC. The school is in her late husband's honour. She also recently donated an award named for her parents, Lloyd and Daphne Chin-Loy, to the G. Raymond Chang School of Continuing Education at Ryerson. Right now, she's preparing for the CB Group/UWI 5K Run for which she is co-patron. She will continue to serve others in any way she can.

"Life is about making a difference in each other's lives," she said, noting it's not just about writing cheques. "It's about giving of yourself and then of your resources, (before quickly adding with a smile) as Ray would say."