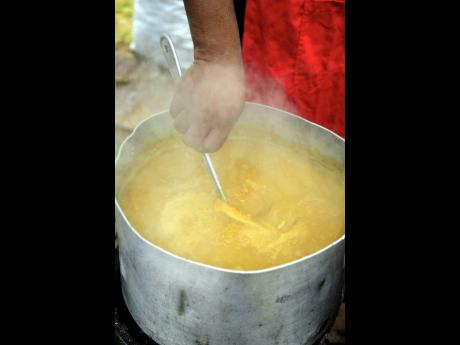 File
Soup is a must at the round robins. 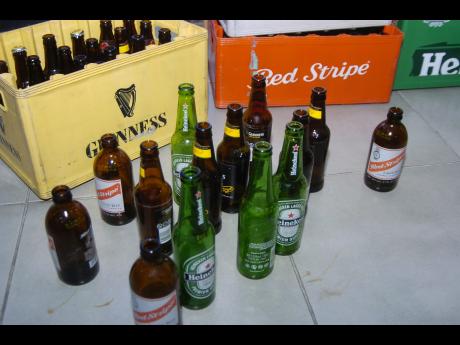 File
There's no round robin without the popular beers and rums.
1
2

Ever hear someone say they're having a round robin and invite you to come by and support?

If you've ever been to one, you know it's a 'drink-up' (or 'drink out'), which usually has some good music and maybe some food (soup is always a sure winner). But there's a bit more to it than that. It is part of the informal economy, and participants regard it as serious economic activity, saying it can provide good monetary returns.

Now, any true Jamaican knows what a partner draw is. Well, a round robin is essentially the same thing, except for one major addition.

"Is like a partner draw, but when you throw your money, some a it yuh use fi drinks," explained Mickesha Gibbs. So for instance, if the draw is $5,000, and $1,000 is set aside for drinks, you collect your $1,000 of liquor at the next drink-up. The drink-ups take place during the round robin's cycle.

"Each person in the round robin keeps one event once a week," explained Diamond Ying. "How long they go for depends on how many persons are in it." Gibbs noted that while there is no set number, most persons go for, between 15 and 20 people. A round robin master as she calls it, has a 'launch', which usually serves as the first meeting where potential partners are courted. Once those interested hear the terms of the round robin, they pay their first instalment.

"Every round robin have dem own rules and regulations," said Gibbs, but there are two rules that stand out. "Yuh mus' throw in your hand on time. Some round robin even have late fees." But one very important rule is that everyone is expected to attend the events.

"If people support yours, yuh haffi support dem back," said Gibbs. "Because a di end a di day, yuh haffi sure a yuh draw." Failure on the part of any member to consistently attend the parties of other group members is definitely frowned upon. Technically, anyone can be a round robin master, but some are better suited.

"It better if di somebody have a business, or if dem have money otherwise," said Gibbs. "So if somebody can't come up wid dem hand, dem can step in." The master may also take care of the music, hiring the same sound to play at all the events. Anyone can join the group, provided they can keep up.

"You don't need to ask permission from the police, but you can, just for back-up," said Ying. Many persons readily admit partner draws help with various bills and expenses. And Ying said that round robins are no different.

"The house get first hand, plus them have hand for themselves," she said. "Plus the person hosting that week benefit because people buy their liquor, and they get their hand that day." The venue for the drink-up can vary. If the round robin master has a bar, they may provide it for the other participants to use. But it doesn't even have to be held at a formal establishment. Ying cautioned though, that persons need to budget when they are setting up.

"You can hire people to help you, like to buy ice or help decorate the place, but remember, you would have to pay them, and that's more expense to you."

Round robins are popular mainly in the Corporate Area.