Hillary Clinton: 'We owe him an open mind, chance to lead' 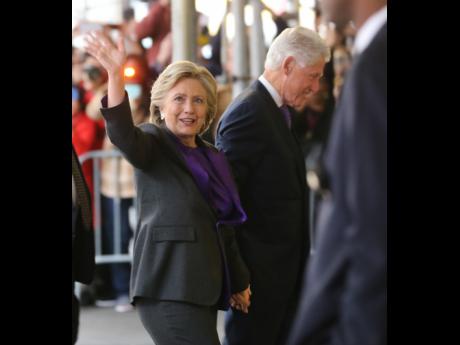 AP
Hillary Clinton, holding hands with her husband, former President Bill Clinton, waves to a crowd outside a New York hotel as she arrives to speak to her staff and supporters after losing the race for the White House, Wednesday.

WASHINGTON (AP):
A day after Donald Trump, against all odds, won election as America's 45th president, Hillary Clinton on Wednesday said the nation proved to be "more divided than we thought" but urged unity and told her supporters, "We owe him an open mind and a chance to lead."

Standing before a crowd of crestfallen but cheering supporters, she said, "This is painful and it will be for a long time."

Trump's triumph over Clinton, not declared until well after midnight, will end eight years of Democratic dominance of the White House. He'll govern with Congress fully under Republican control and lead a country deeply divided by his rancorous campaign against Clinton. He faces fractures within his own party, too, given the numerous Republicans who either tepidly supported his nomination or never backed him at all.

As he claimed victory early Wednesday, Trump urged Americans to "come together as one united people."

That sentiment was echoed by the GOP House Speaker Paul Ryan, who had been a reluctant Trump supporter. "This needs to be a time of redemption, not a time of recrimination," Ryan said in a news conference. He also said Trump had earned a "mandate" to enact his agenda.

Clinton, who had hoped to become the first woman to be elected president, called her Republican rival to concede but did not plan to speak publicly until Wednesday morning. She was leading the nationwide popular vote. Though some states were still counting ballots.