Support continues to pour in for family of murdered JC student 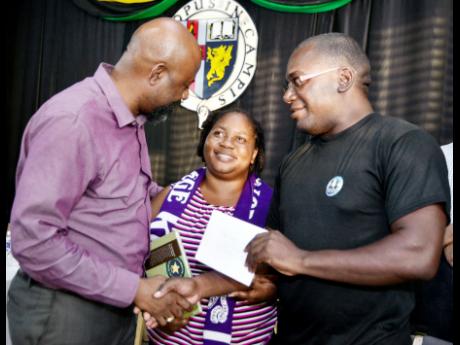 Almost two weeks since Nicholas Francis was murdered on a bus on Old Hope Road in St Andrew, support continues to pour in for his family from all angles, the latest being at Jamaica College's regular Parent-Teacher Association (PTA) meeting on Monday inside the Karl Hendrickson Auditorium at the school.

"We are here today because this is the actual regular meeting of our PTA, but since Nicholas' death, this meeting has taken on its own life," Jamaica College PTA President Errol Holmes told The Gleaner.

Presentations of special tokens were made to Nicholas' parents by he PTA presidents of Meadowbrook High School and Kingston College.

Other PTAs that showed support include the St Andrew and Ardenne high schools.

Holmes congratulated Nicholas' parents for the strength they have been displaying after the murder of their son, who was one of two offspring for his mother and his father's only child. He was insistent that Nicholas' death would not be in vain.

"It's very brave of these young people (the parents) to come and sit with us because even though they are here, being in this room this evening opens up the pain much more. These two parents of Nicholas Francis have decided to come because we have not given up the vision as to who we are as a school and what we ought to become as a country," Holmes said.

"We know that forever the parents will have a hole in their heart. Today is our day to say to them how much we love you (and), how much we appreciate you. As long as you have breath, this school will continue to rally around you and pray for your strength."