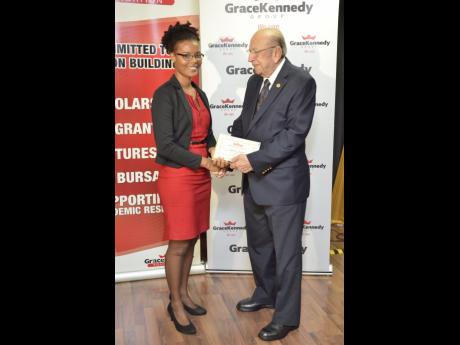 More than 75 young adults will see their dreams of pursuing higher education realised through a $17.5 million investment by the GraceKennedy Foundation in scholarships and bursaries. The foundation recently held its awards ceremony and officially handed over the financial awards to the students.

According to Grace Burnett, chief executive officer of the GK Financial Group, GraceKennedy's investment in education through its two foundations was aimed at improving Jamaica's future.

"All of our scholars are exceptional students, with most coming from low-income households and would not have been able to afford university education without assistance. Education is a very important area of focus for GraceKennedy, which is why our two foundations - the Grace & Staff Community Development Foundation and the GraceKennedy Foundation - invest so heavily in our children," Burnett said.

"We want to be the game changer - changing the structures in inner-city communities, from dons to doctors or engineers or accountants and the many other professions, developing a strong workforce for Jamaica's future," she added.

Seven scholarships were presented to first-time recipients, while existing scholars, who maintained at least a B average, had their awards renewed.

The prestigious GraceKennedy Jamaica Scholarship for 2016, tenable at The University of the West Indies (UWI), went to Avaughn Prendergast, who is pursuing a bachelor of science degree in actuarial science. A former head boy at Charlemont High School in St Catherine, Prendergast obtained nine grade ones in his Caribbean Secondary Education Certificate (CSEC) examinations. He completed 12 units of Caribbean Advanced Proficiency Examination (CAPE) with grade ones and one grade two. He is passionate about maths and represented Jamaica at the Math Olympiad in Nicaragua earlier this year. In giving back to his alma mater, Prendergast served as teaching assistant in his school's summer programme.

The Douglas Orane Scholarship (for a student studying science, technology or engineering at the University of the West Indies (UWI), University of Technology (UTech), or the Northern Caribbean University (NCU) went to Stephan Pitterson, formerly of Campion College. Pitterson is pursuing a bachelor of science degree in bio-chemistry at the UWI. He has eight CSEC subjects, with seven grade ones and one grade two. He has eight units at CAPE, including seven grade ones and one grade two.

Former GraceKennedy Chairman and Chief Executive Officer Raf Diaz was on hand to present a scholarship named in his honour to Shanike Josephs, a first-year accounting student at UWI. Her extra-curricular involvement includes membership with the Jamaica Automobile Association, United Nations Club, Girl Guides and Interact. Josephs has nine CSEC subjects, eight with grade ones and one grade two. She also completed eight units of CAPE, with seven grade ones and one grade two.

Other scholarships presented included the GraceKennedy-University of Technology Jamaica Scholarship, which went to Shanika Spencer; the Edna Manley College Scholarship to School of Drama student Waldane Walker; and the Bruce Rickards Scholarship, specifically for a Kingston College past student, went to Kadeem Campbell and Mark Lewis .

The scholarship application period runs from May 1 to July 15 each year.