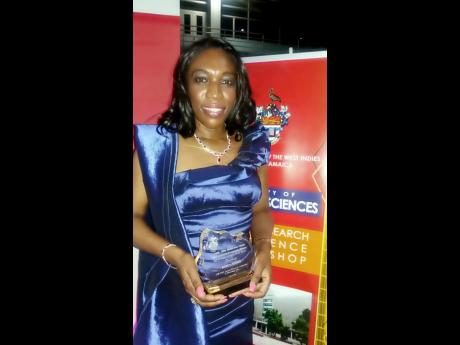 The prestigious award was given jointly by the Pan American Health Organization (PAHO) and the Faculty of Medical Sciences (FMS) at the University of the West Indies, in honour of the public health pioneer, Professor Sir Kenneth Standard.

Standard, who died in August 2004, was a pioneer in public health development in Jamaica and the Caribbean, making a tremendous contribution to community medicine throughout the region.

Brown, seen as the public health practitioner who best embodies Standard's legacy, was described by the awarding body as an 'agent of change'.

She was presented with the award last week by Professor Horace Fletcher, dean of the Faculty of Medical Science at the UWI, at the official opening ceremony to launch Research Week for the faculty.

Brown is grateful for the award when she spoke with Rural Xpress on Tuesday evening.

"I am elated to have received this prestigious award and I'm happy that somebody has seen the work that I've done," Brown said. "I hope this award will work as a pedestal to showcase the work of public health inspectors across the island," she added.

Brown has served in the public health service for the past 24 years, most of her time spent at the St Ann Health Department, before being promoted to the regional level.

In 2012, during an outbreak of food borne illnesses in the Turks and Caicos Island, she was the public health expert who assisted PAHO in helping the Caribbean country to combat the outbreak.

Brown has been on several overseas missions pertaining to public health and humanitarian causes, including trips to Argentina, Scotland, Wales, England, Trinidad and Tobago, Turks and Caicos, United States.

She beat out six other nominees from across the island who were short listed for the award.

The criteria included innovation, commitment/service, recognition, service and acceptance by the community, effectiveness, knowledge and use of team approach.

The award is the latest of several Brown has earned over the years, including the Commonwealth Fellowship Award to the United Kingdom, which she received in 2010.

Brown says she is committed to continuing to serve at a high level in public health in order to have an impact on the quality of lives of the people of Jamaica as well as the sustainable development of the country.

She also hopes to do higher studies in pursuit of excellence.