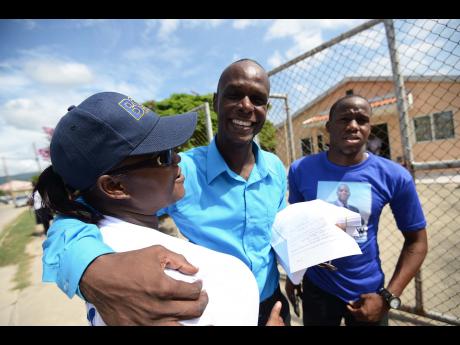 Ricardo Makyn
Independent candidate Gregory Hamilton, who is vying for the Gregory Park division in Portmore, St Catherine, with supporters outside the nomination centre on Nomination Day last Friday.

Thirty-seven-year-old Gregory Hamilton is an independent candidate vying for the post of councillor for the Gregory Park division in the St Catherine Municipal Corporation.

Hamilton, who has resided in Gregory Park Proper since birth, has incorporated the slogan 'Bridging the gap' into his political campaign.

Formerly a computer engineer at Caymanas Track Limited, he was among 16 workers whose jobs were terminated on August 22.

The political newcomer prides himself on the unity within the area and is spoken of highly by supporters from both major political parties.

Twenty-year-old Ryan Morrissey, a resident of Gregory Park, described the local government elections as "the same thing over and over again".

Morrissey told The Gleaner, "After a party wins, you don't hear back from them, but Gregory different, him look out fi everybody."

He added: "If Gregory did have fi dem money, we good."

A mother-daughter duo clad in the independent candidate's colours (royal blue and white), who requested anonymity, told The Gleaner that they were "strict labourites, but Gregory a do the most 'bout ya".

Upon arrival at the nomination ground, Cedar Manor Community Centre, Hamilton and a handful of supporters completed the official nomination process first. Thereafter, he could be seen engaging in laughter and friendly dialogue with supporters of the other political entities as well as his own.

Speaking with The Gleaner about his candidacy, he said: "Unification in moving forward, social intervention through sports and establishment of a well-needed community centre are crucial."

When questioned as to whether he would continue the movement if his bid proves unsuccessful, Hamilton said: "I will always be present in this community. I stand for proper representation of the people, and I continue to urge the people to look out for their own best interest at all times, as we are Jamaicans first of all."

Hamilton competitors in the election are Joy 'Bella' Brown for the Jamaica Labour Party and Oral Gunnings, for the People's National Party.