Need to seek out bigger markets for Jamaican products - Golding 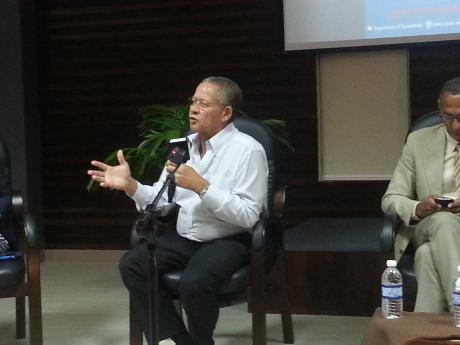 Former prime minister of Jamaica, Bruce Golding speaking on critical considerations that will determine the extent and nature of Jamaica’s future involvement with CARICOM 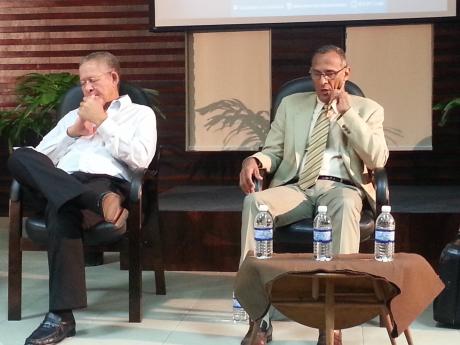 Chairman of the Government's Caribbean Community (CARICOM) Review Commission, Bruce Golding, using the analogy of a pond of fish, says Jamaica, by itself, is too small to sustain a prosperous economy, suggesting that the country should find an efficient and modern way to trade with the region and the rest of the world.

Golding, a former prime minister, believes there is a lot for Jamaica to consider as it seeks to find economic prosperity, including looking to the north to forge strong partnerships with Cuba and the Dominican Republic.

"We have a situation where we do have the pond of CARICOM, divided up into sections ... the nutrients in the water are not commodities. They accumulate in some sections, but they are deficient in others," Golding said while addressing a policy discussion forum hosted by the Department of Economics at the University of the West Indies, Mona, last Wednesday.

He said countries in CARICOM need to produce enough to sustain themselves and to find arrangements to efficiently trade with the world so it can earn foreign exchange to pay for the things it does not produce, appearing to suggest that the current arrangement was ineffective.

Golding, in the meantime, said that there are significant challenges ahead for countries in CARICOM as the arrangement can result in big winners and big losers on the sensitive subject matter of trade among member states.

"The challenge is to find a way to do it right and to do it in a way that some may win more than others, but nobody would lose. Those who do not win big must not do so largely because of their own failure and not because of the way in which the configurations are made," Golding said.

It is a point that Golding and Owen Arthur, a former prime minister of Barbados, who was also in attendance, seem to agree on.

Arthur said that some states within CARICOM are unwilling to expose their domestic market and economy to the Caribbean out of fear that other countries could score big, leaving the domestic players with very little.

The former Barbadian prime minister argued that, overall, the issues relating to economic integration of CARICOM stemmed from two main sources - the failure to complete and perfect the arrangements for a single market, and the "need to remove the ambivalence and to settle upon effective arrangements by which to create a virtual single regional economy".

A CARICOM commission on the economy has been created to give effect to a different strategic direction and work programme in respect of the creation of a virtual single regional economy.

With respect to the work of the commission, Arthur said: "It is an ambitious proposal whose implementation will test the stretched institutional resources of CARICOM."