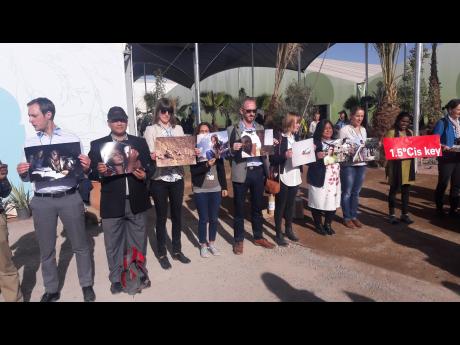 Petre Williams-Raynor
Protest was a feature of this year's global climate talks in Marrakech, Morocco, where participants lobbied for firm climate action. 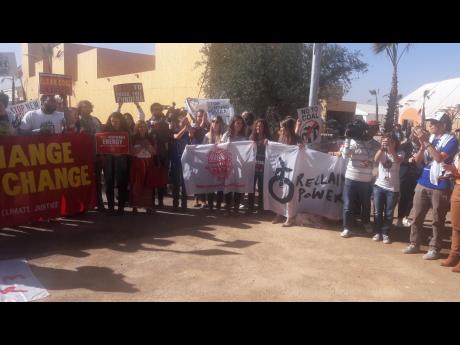 Petre Williams-Raynor
Protesters advance a number of key messages at this year's international climate talks being held in Marrakech, including saying no to coal and the need for 100% renewable energy.
1
2

With the future and extent of United States (US) financial and/or other support of the global climate change response unsure, Caribbean islands have been cautioned to be prepared to go it alone.

Former head of the CARICOM Task Force on Sustainable Development, Dr James Fletcher, said there are currently four scenarios for US support under the presidency of Donald Trump.

"One is that the US continues as is. I was very pleased with the statement made by Secretary of State John Kerry, who very clearly expressed the solidarity of the US and the continued commitment of the US to the Paris Agreement and to climate action. That was very heartening, as well as some of the statements by the world leaders ... . That is the best-case scenario for us: that the incoming Republican administration allows things to continue as is," he noted.

"There is also the option that they withdraw from the Paris Agreement ... . The agreement requires that they wait three years after having ratified before they can officially withdraw and after that, there is still a one-year period before the withdrawal can come into effect. So in the event that the first thing Mr Trump does after he is sworn in is to give instructions that he is withdrawing from the Paris Agreement, that probably would not happen until the end of his term, and I don't know that politically that would make much sense for him," added Fletcher, who is also Saint Lucia's former minister of sustainable development.

There is, too, the option of withdrawing from the United Nations Framework Convention on Climate Change (UNFCCC).

"If he does that, then the US could be out of the UNFCCC in one year and by withdrawing from the UNFCCC, they also would automatically withdraw from the Paris Agreement and any agreements associated with the convention. It also would be relieving itself of its obligations to capitalise the Green Climate Fund and anything else...," he said.

There is no question of the challenge that would present. The US is a significant contributor to, for example, the work of the Intergovernmental Panel on Climate Change (IPCC) - the authority on climate change research - and to the UNFCCC.

The fourth scenario, Fletcher noted, is for the US to remain as part of the process while making no meaningful contribution.

"So you are there, but you are really not there - your participation is muted, your funding is tempered and you are not as enthusiastic as we have seen," he explained.

However, Fletcher is hopeful that "good sense will prevail and the statements made by candidate Trump will not be the policies pursued by President Trump".

Still, the region must be prepared.

"We have to be aware that an anti-climate change agenda and a very heavy dose of climate scepticism and climate denial has been part of the agenda of the Republican Party for a while. In this issue, President-elect Trump is actually consistent with the policies of his party. His party has never really believed in climate change," said the man who provided technical advice to CARICOM at this year's climate talks.

One party representative present in Jamaica earlier this month underscored this point.

"I do believe in climate change; it's called summer, winter, spring and fall. It is not anthropogenic. It is not man-made," said Republican Mike Hill, member of the Florida House of Representatives, at a Gleaner Editor's Forum, convened under a US Embassy-Panos Caribbean-51% Coalition initiative to raise awareness about the US presidential election process.

"Our climate is being affected primarily by two major forces - our sun and our oceans. Me driving my car to and from work is not changing our climate," he added.

The representative also revealed his objection to the Paris Agreement, which the US ratified on September 3, as well as to the provision of financing to support climate change adaptation and mitigation.

"It would be much too expensive to not only the American taxpayers, but the other countries that is imposed upon for what has been proven scientifically to be very minimal improvement in a reduction of carbon dioxide into the air, which, by the way, is not a poison. Our plants need it (Carbon dioxide) in order to survive," he said.

Fletcher, meanwhile, takes some solace in the fact that climate change is bigger than any one individual, party or country.

"You have 109 parties that had ratified this agreement (the Paris Agreement) within the space of one year and many more countries are coming on board. There is a very strong commitment ... people are resolute in their belief that firm action has to be taken," he noted.