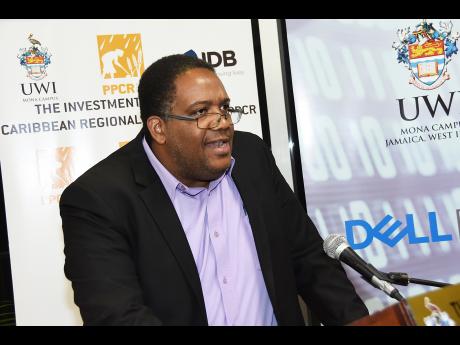 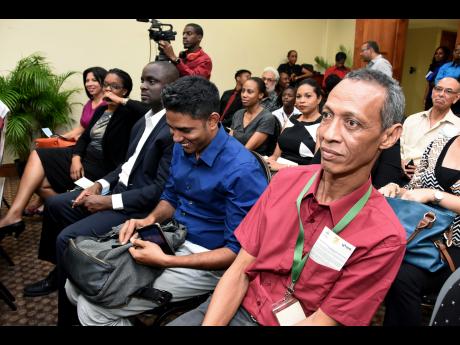 Contributed
A diverse audience of Intergovernmental Panel for Climate Change scientists, policymakers, the local academic community, and journalists were present for the launch of SPARKS on Tuesday evening at the University of the West Indies Regional Centre.
1
2

In the race to stay ahead of the curve in the world of climate-change research, there are few things as thrilling to scientists as a new tool to improve efficiency in their data collection and sense-making efforts.

Local and regional climate scientists got just such a thrill this week with the unveiling of the Scientific Platform for Applied Research and Knowledge Sharing (SPARKS), labelled 'a big deal' and as 'a game changer' by Professor Michael Taylor, who heads the Climate Studies Group at Mona.

The acquisition of SPARKS - a high-performance computing and storage system - was financed to the tune of US$750,000 by the Inter-American Development Bank under the Regional Track of the Pilot Programme for Climate Resilience (PPCR).

Sourced through Dell-Fujitsu, the supercomputer promises a world of goodness for climate research and the adaptation planning it is to inform through, for example, enhanced climate modelling, in Jamaica and the Caribbean.

"SPARKS has the potential to immediately increase access to a larger pool of ideas that we previously thought of as inaccessible, merely because of their perceived impracticalities," he added.

Ainsley Henry, programme manager for the investment plan of the PPCR Caribbean Regional Track, walked The Gleaner through the capabilities of the system.

"Modelling is an attempt to forecast some of the changes that are likely, the types of weather that are probable based on information today and all of what we have seen in the past. So it is using all of the information we have to predict what is going to happen. All the modelling done in the world has been done at a much larger scale than the Caribbean," he said.

"Now, the modelling for the Caribbean will give you a broad basis of what is likely to happen, but it will not give you what would happen in, for example, Jamaica or Haiti specifically. The big advantage this machine provides for the Caribbean is that now we can do it (modelling) on a country-by-country basis, but also on an area-by-area basis," Henry added.

What is more, the pace at which this modelling can be done will be much more rapid going forward.

"Running a model in the past would have taken up to six months, based on the machines they had using. The new machine would be able to do it in two and a half days, give or take. Additionally, in order to store all the data that they need to do these runs, essentially they would have been switching out hard drives in the system," noted the programme manager.

"This machine has the capacity to store a very large quantity of data, so much so that it can run multiple models at the same time. The machine can also be set up so that it can run models in series. So if you have 10 experiments to run, you can configure the machine to run through them sequentially," he explained.

Ultimately, Henry said, what SPARKS does is "it gives us the certain information that we can say, for example, we are going to need to build more storage capacity because we anticipate we will have longer dry periods, (and) so we need to store more water. It can tell us, too, that we need to plant more climate-resilient things because of what specific type of climate it will be - whether hotter or wetter". The supercomputer was launched on the sidelines of an Intergovernmental Panel on Climate Change outreach event for the region, which is being held here in Jamaica. The outreach event, which targets a wide cross section of stakeholders, including journalists, policymakers, scientists and youth, is organised in collaboration with the Ministry of Economic Growth and Job Creation, the Caribbean Community Climate Change Centre and Panos Caribbean.