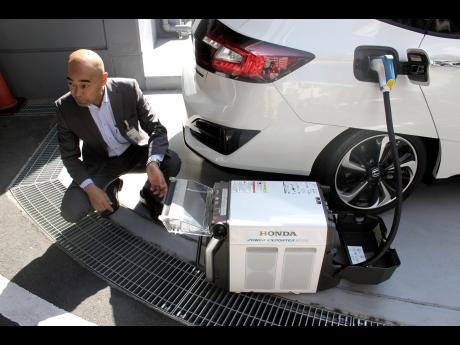 Contributed
A generator connected to the Honda Clarity, which, when fully charged, can power a home for almost a week. 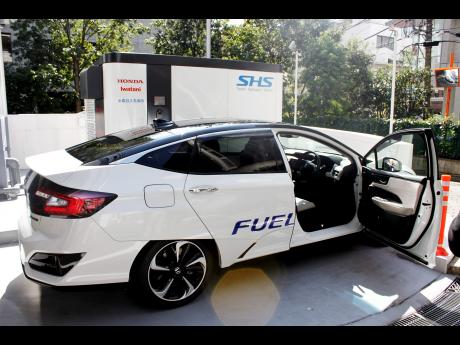 Contributed
The hydropowered Honda Clarity stands beside the Smart Hydro Station, which breaks down hydrogen molecules from water and powers the vehicle. The by-product – oxygen – is released in the air.
1
2

Imagine needing to refuel your car, but instead of popping the tank open to a petrol pump, you are doing so to a generator that produces energy from water.

Yes, you read correctly; the universal thirst quencher is the new fuel in town.

In Minato-ku, Tokyo, Honda Motor Co Ltd is showcasing their hydrogen fuel cell-powered car, standing next to a hydro generator.

The generator produces energy from water, breaking the molecules to release hydrogen as fuel with the by-product oxygen, which is released into the atmosphere - emissions do not get cleaner than this.

"We are using water as raw material to produce energy," said Yukihiko Kakutani, assistant manager of corporate public relations at the company. "This is the future, not only (for) powering cars, but (also) creating smart and sustainable communities," he added.

The hydro cell-powered Honda Clarity, Kakutani informed, can run 700 kilometres on seven kilogrammes of hydrogen fuel, making it energy efficient. Also, when connected to an electric generator, the Honda Clarity can power one household for almost a week - a step towards reducing dependency on fossil fuels and a move to renewable fuels, which is being researched by automobile manufacturers worldwide.

The technology, according to the Honda executive, will be apt for island states, which will help to decrease reliance on the electricity grid. Further, should a natural disaster strike, it would ensure uninterrupted power supply for the residents, essential services and educational institutions.

"Hydrogen technology is beneficial in many aspects - it requires less space, can retain charge longer and there is less drainage of energy," noted Kakutani.

This pioneering technology is not a distant dream; Honda plans to roll out the Clarity in select markets in 2017.

Though the cost to the customer of this Star Trek-ish, hydropowered technology would be prohibitive for mass roll-out, car manufacturers are researching how to rationalise the prices.

"Our goal is to keep the skies blue for the next generation," Kakutani said.