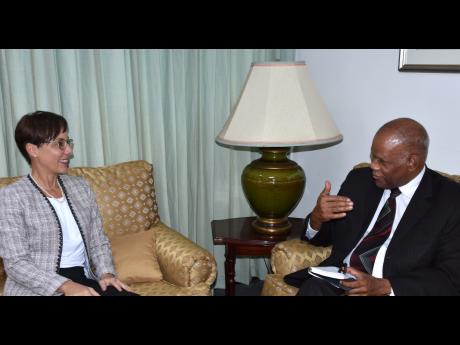 High Commissioner-designate to the United Kingdom (UK) Seth George Ramocan left the island on December 21 to take up duties in that country.

The JIS quoted him as saying, prior to his departure, that he was highly appreciative of the confidence placed in him by the Government of Jamaica.

Ramocan pointed out that he would work to deepen the relations between the Government and members of the diaspora.

"Jamaicans in all the diaspora locations need to be engaged so we can develop a much closer relationship. Persons of Jamaican descent and Jamaican nationals are willing to participate in Jamaica's development, but they just do not know how, so my job will be to share with them how to participate in this development," he added. In relation to the wider UK community, the high commissioner said that with the UK going through the Brexit, he believes that it is an opportune time for dialogue. "We want to make sure that relationships with the business community are deepened in order to attract investments into Jamaica and increase exports from Jamaica to the UK and the Nordic countries," he said.

Ramocan, who served as the consul general to Toronto, Canada, from 2009 to 2014, noted that the tenure has prepared him for this higher role.

Today, he will present his credentials to the prime minister of the United Kingdom, Theresa Mary May.