'Your service is appreciated, Pastor Clarke' 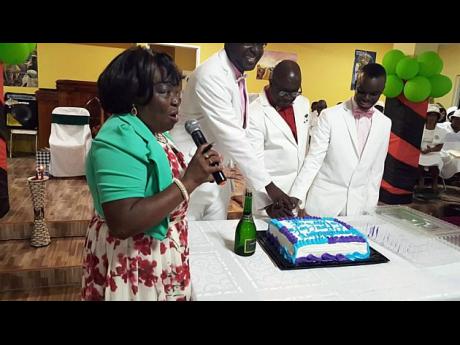 Sunday, December 18 marked a memorable milestone in the lives of members of the Christiana Circuit of Baptist churches and their pastor Reverend Clement Clarke.

It was a service of appreciation for Clarke and his family who have given 20 years of dedicated service to the circuit. And by all appearances, since August 1, 1996, Clarke has been bringing to fruition, the bi-centennial project of the Jamaica Baptist Union (JBU), to establish a church in Christiana, where the service was held.

The exciting and uplifting programme was organised by the members of Litchfield, Chudleigh and Christiana Baptist churches and featured a combined choir, youth choir, tributes and other presentations perfectly befitting the occasion and the affable Reverend Clarke's personality.

The glowing tributes spoke volumes about Clarke's humility, ability to inspire, very encouraging ways, ability to motivate, fatherly, caring disposition, ability to treat everyone equally, visionary, a confidential person, full of good vibes, dapper dresser, someone who makes time for others and a man of God.

Long-time friend and mentor of the celebrant, Reverend Dr Learoy Campbell of the Mandeville Circuit, lauded the organisers for recognising their pastor, saying that many pastors serve for decades without being shown appreciation for their work.

In his well-received sermon, Campbell said in part, "As we celebrate the season of advent, we must remember that Jesus came into the world and made an impact on it after God intervened in his life and made him his servant. Similarly, we celebrate a man who had been called by God to do his work."

Campbell noted that it was not easy to pastor people with varying views of you, but Clarke has obeyed God's call to be more than a teacher and also shepherd his flock.

"You have shown dedication, discipline and submission to follow Jesus and allow his power to prevail over your life." Campbell described Clarke as a man of God who like the wise men did not accede to Herod's requests to lead him to baby Jesus, he but has stayed the course.

He cautioned his friend about detractors who have "underbelly motives" and who should be shunned.

Clarke thanked the congregation for their thoughtful gesture which he said was well appreciated by himself and his family. He thanked his dad, sister, deacons and other colleagues who have, over the years helped to make his journey memorable.

He promised them that as he approached retirement from the classroom, "I will be seeing every member a lot more often, I appreciate all of you and I love you all," he said.

Gifts were presented to Clarke, his wife, Marcia, who was unavoidably absent, and their sons Marcel and Clemar. The evening ended with the cutting of a cake and refreshment.