FLOW-ing with compassion - 2016 spend on education, health, environment and other areas tops $150m 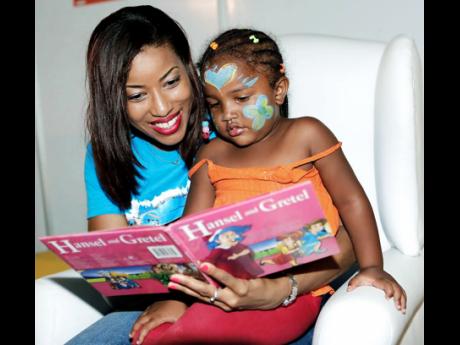 Kayon Wallace, director of corporate communications and stakeholder management at FLOW, enjoys reading to a child at the 2016 FLOW Skool Aid 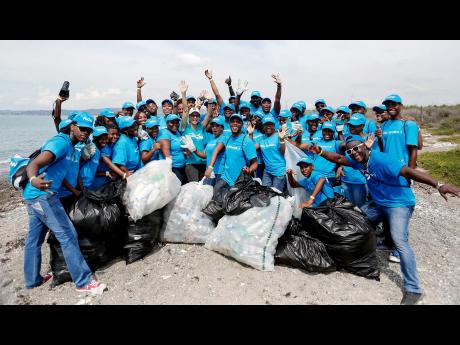 Contributed
Members of the FLOW employee volunteers group, take time out for a photo during the 2016 beach clean-up day. 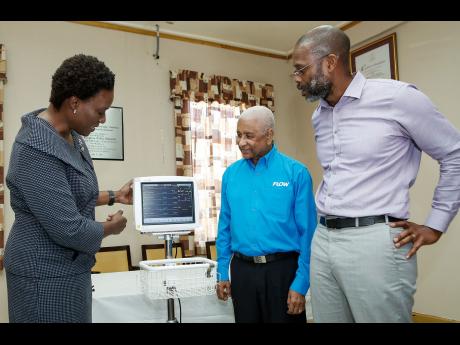 Contributed
Dr Natalie Whylie (left), senior medical officer at the Kingston Public Hospital, demonstrates the use of the electronic patient monitor to Errol Miller (centre), executive chairman of the FLOW Foundation, and Garry Sinclair, managing director of FLOW, during the handover. 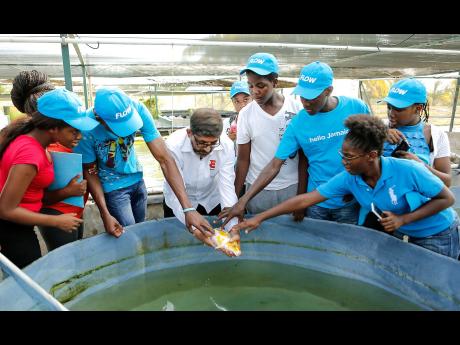 Telecommunications firm FLOW, through its charitable arm - the FLOW Foundation - continues to spearhead a far-reaching philanthropic programme which has had tremendous impact in the areas of education, health and the environment over the years.

This year, the company has taken on more than 50 projects which have reaped great benefits for the persons impacted.

In summing up the foundation's contribution, Errol Miller, executive chairman of the FLOW Foundation, said its motto is very simple.

"It says: 'Together we can make a difference.' During 2016, our foundation continued to strive to make a positive difference in the lives of thousands of Jamaica, especially the country's young people."

In the area of education, FLOW invested more than $80 million towards the staging of its iconic FLOW Skool Aid event held in September. More than 20,000 students benefited from scholarships, free school supplies, medical and dental checks, and other services.

According to Miller, the event, which has been staged now for seven consecutive years, remains a high priority and plans are in place to expand its reach in 2017.

Further in the field of education, the foundation officially launched the inaugural FLOW Foundation Recharge programme, which is now being piloted at the Kingston High School.

The behavioural modification programme designed for teens 14 to 17 is aimed at improving academic performance as well as social, interpersonal and communication skills, and exposes the students to a wide array of life skills, alternative career paths and business processes.

Additional developmental support was also provided at the high-school level, with more than 25 high schools benefiting from sponsorship values at just over $4 million from the foundation, which helped them to attend the annual Penn Relay Games in Philadelphia. This has been an ongoing effort for the past 23 years.

At the individual level, the FLOW Foundation has offered more than $1.3 million in scholarships and grants for deserving students.

This year, $450,000 was assigned to provide bursaries for students living with the sickle cell disease and pursuing their studies at tertiary institutions. These bursaries were granted in collaboration with the Sickle Cell Unit of Jamaica.

Electronic Engineering/Information Technology at tertiary institutions also received scholarships valued at $650,000 towards completing their education. Throughout the year, several small disbursements were presented to needy primary and all-age students.

A staple on the foundation's calendar, the annual Summer Web Design, was again hosted for teens from underserved communities. Participants were exposed to basic computing with emphasis on web design skill training.

An added special feature of this year's programme was 'An Introduction to Aquaculture Systems', which was conducted in collaboration with Professor Raghavan Ramamoorthy, president of the RE School of Education & Technology.

According to Miller, more than 80 students benefited from the programme which cost the foundation more than $600,000 to stage.

The FLOW Foundation continues to make a contribution in the area of health care. The flagship programme in this area is the FLOW Paediatric Cancer Fund, which was launched in 2015 and recently 'topped up' with $1 million by the company.

Over the past year, the fund has provided assistance for 10 children to access critical laboratory tests required in the treatment of their condition. The fund is administered in conjunction with the Bustamante Hospital for Children.

Earlier this month, the foundation also answered a call from the island leading public hospital and donated four state-of-the-art patient monitors to the Kingston Public Hospital Accident and Emergency Unit valued at $1.2 million.

At the community level, the FLOW Foundation, in partnership with the Ministry of Health, responded to the threat of the Zika virus with a public education campaign and a school-based competition designed to raise awareness about the disease.

"Our staff volunteers are among the most willing and responsive you will find anywhere. Our views is that service and assistance to others is the rent we pay for the space we occupy on earth," declared Miller.

In collaboration with the FLOW employee volunteers group, the foundation joined thousands of other volunteers to participate in the internationally recognised beach clean-up event spearheaded by Jamaica Environment Trust.

"We accept that we have an inescapable obligation to give back to the society in which we 'live' and do business, and as such we embrace the responsibility of giving back with humility and pride," said Miller.