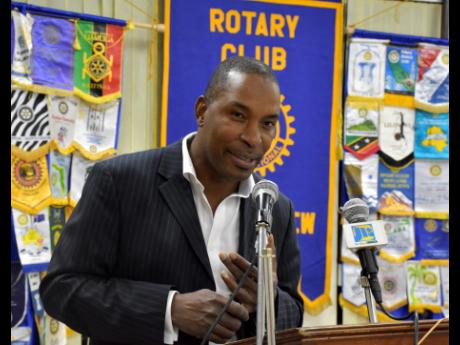 Dr Carl Bruce, medical chief of staff and Consultant Neurosurgeon at the University Hospital of the West Indies (UHWI).

Dr. Carl Bruce, medical chief of staff and consultant neurosurgeon at the University Hospital of the West Indies (UHWI), noted that there was a spike in the number of trauma cases the hospital received during the holidays. These included spinal cord injuries, spine fractures, and concussions.

This, he said, often impacts the extent to which major elective procedures such as bypass surgeries can be undertaken, consequent on space constraints created as medical personnel try to accommodate both sets of patients in the primary recovery area, the Intensive Care Unit (ICU).

Speaking at a recent St Andrew North Rotary Club meeting at the Institute of Chartered Accountants of Jamaica (ICAJ) on Ruthven Road, St Andrew, Bruce sought to provide further clarification on the recent cancellation of major surgeries at the institution, which was announced by Board Chairman James Moss-Solomon.

"We have a lot of (elective surgeries), but when there is an emergency, we have to stop and deal with it. Those (trauma) patients are usually admitted to the Intensive Care Unit, whether it be for a head injury, spinal injury or even diabetics who are out of control. We prepare for the holiday deliberately because we are expecting increased volume," he said.

Bruce pointed out, however, that surgeries performed at the UHWI were often complex matters referred from other medical facilities, which required that the patients receive critical aftercare in highly specialised areas such as the ICU.

He said based on the number of trauma cases which the UHWI received over the recent holidays, "it is going to take a while to reduce the volume from our intensive care unit".

He assured, however, that once the number was reduced, "the major elective surgeries that require critical-care space for recovery will resume".

Bruce said it was important to note that although major surgeries were put off, other procedures have continued, with as many as 20 on some days.