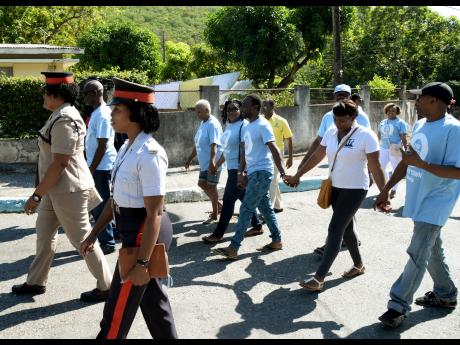 Jermaine Barnaby
Members of the Jamaica Constabulary Force among persons participating in a peace march in August Town yesterday.

With an early-morning devotion at the death spot and a walk through of the area, dozens of August Town residents marched for peace, amplifying their concerns and reaffirming their commitment to prevent their St Andrew community from returning to the deadly enclave it once was.

Sunday night's killing of a man in the area sparked public outcry as residents of the traditionally volatile community condemned the act, their first in just over 12 months.

Police yesterday said they were questioning a woman in connection with the gun attack. According to the cops, the dead man, 25-year-old Damian Lewis, who resided in downtown Kingston, was visiting the female who lives in the Bedward Crescent area of August Town when he was attacked.

"We have located the woman and we are doing our investigations. She is still being processed by the Half-Way Tree police," offered Inspector Stephen Taylor, sub-officer-in-charge of the August Town Police Station.

"I know August Town people don't like this sort of situation and we are asking the citizens to help the police to bring that perpetrator to justice. I am depending on the people to come forward."

According to the police, the female accompanied Lewis to the bus stop where his attacker pounced, shooting him in the forehead and neck about 6:00 Sunday evening as residents gathered at a nearby football game at another section of the community called 'Africa'.

Yesterday's meeting saw representatives from the Peace Management Initiative, the Sizzla Kalonji Youth Foundation, and the police, among others.

People's National Party councillor for Papine, Venesha Phillips, who residents said is instrumental in the peace initiatives, was not on the island yesterday, but was livid when told about the killing via telephone.

Member of parliament for the St Andrew Eastern constituency, Fayval Williams urged the residents not to be daunted in the crime fight.