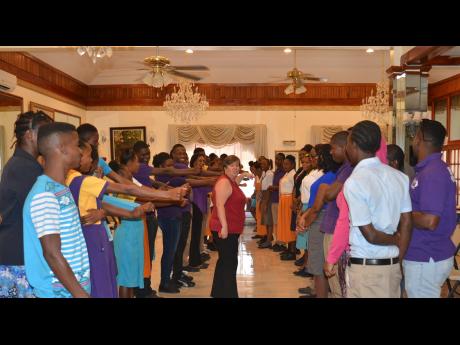 Claudia Gardner
Courtney Burke (centre), a specialist in peace and conflict resolution, conducts a session with participants in a peace conference in Negril last week. 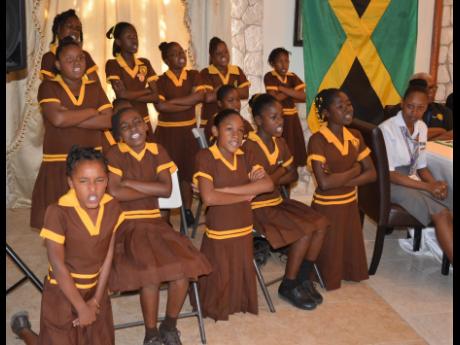 Claudia Gardner
Students of the Little London Primary School perform a song during a peace conference in Negril last week.
1
2

The ongoing bloodletting in western Jamaica has attracted the attention of friends in North America, who last Friday joined with a local group in another anti-violence initiative.

This time, issues including the disunity among Christian denominations in Jamaica, joblessness, 'address discrimination', and anger management were among the areas which took centre stage at a peace and conflict resolution conference, organised by the Rotary clubs of Negril, Lucea and Washington, DC.

More than 70 youth from schools and community groups in Hanover and Westmoreland, psychologists and an array of social agencies, including the Peace Management Initiative (PMI) and the Victim Support Unit, participated in the one-day conference event at the Rayon Hotel.

A firestorm was sparked in the day's first session when Duke Dockery, a 21-year-old resident of Whitehall in Negril, complained bitterly that the police were not visiting his section of the community - a depressed area dubbed 'Little Haiti' or 'Zinc Fence Lane' - and that business people were constantly rejecting qualified applicants from the area.

"If it wasn't for the Catholic soup kitchen, a lot of youth would go hungry, because they are not working because they can't get a job," Dockery told The Sunday Gleaner.

"It was really empowering for youth to see schools, churches, the police and people come together here. But I want to see the police come in my community and interact with the youth and even my age group and above," said Dockery.

Revival Bishop Oneil Russell of Westmoreland got huge applause when he addressed a question posed by a student about the failure of the churches to unite to help to stem the bloodshed in the region.

"If the Church continues to be divided, then we are going nowhere ... when the youth of today see the Church being divided, they will also stay away from us," added Russell.

Lenora Thomas, guidance counsellor at the Hopewell High School in Hanover, said the students from that school who participated were chosen based on them having seen or engaged in violent situations. Thomas said these students are interested in better alternatives to dealing with conflicts.

"Based on what was done today, I think it was beneficial to the students because sometimes the violence that permeates the communities and the homes comes into the schools. So the students that came today, they would have been able to identify with some of the challenges.

"I hope we can train these students as peer mediators to help to deal with the conflicts that arise from time to time in the communities at home and in the school," Thomas told our news team.

Head girl of the Belmont Academy, Daniela Woodbine, said the conference had exposed them to opportunities to form partnerships with some of the key violence-prevention agencies within the region.

"For me, I learnt a lot and I relearnt some things, because I am also a certified mediator. Being here today also helped me to realise that there are other persons out there that I could call in to help with situations.

"For example, the PMI. I never knew there was a Peace Management Initiative where I can call on to the school to deal with the issues that we might have," said Woodbine.

Conference coordinator Angela Haye of the Rotary Club of Negril said she was hoping that with the success of the conference, additional programmes, supported by the Washington, DC, club, will be undertaken in the coming months.

"One of the suggestions is that we look at making persons who have been part of this peace ambassadors for their schools and communities. We will analyse the evaluation forms which were completed by the participants [and] we will see some of the further steps we could take, because specific questions were asked on the forms that would elicit specific responses," said Haye.