Light on violence | ‘We are killing ourselves in undeclared civil war' 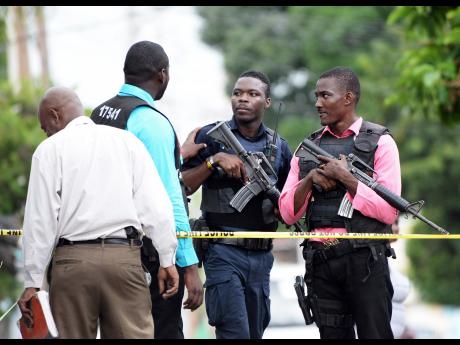 File
Police on the crime scene on Wellington Street, where a shooting took place last year.

To understand the seriousness of the homicide problem among the combatant age of the male population of our inner-city communities, we shall compare these figures with Iraq at full-scale war. A 2013 study (Mortality in Iraq Associated with the 2003–2011 War and Occupation: Findings from a National Cluster Sample Survey by the University Collaborative Iraq Mortality Study) calculated that there were about 461,000 war-related deaths in Iraq during the US-led invasion of 2003 to 2011. This means an average yearly death of 57,625. Using the estimated average population of 28.17 million for the period, we can calculate that the war-related homicide rate was 205 per 100,000. Notice that at 405 per 100,000 for combatant aged males in the KMR, the death rate was almost twice higher than that of Iraq at full-scale war.

The data over the last 16 years show devastating results from these wars - a kind of social suicide. Basically, we are killing ourselves. Let us now examine the side of the State. Between 1989 and 1999, the police death rate was 112 per 100,000. This increased to 154 per 100,000 between 2000 and 2010 before the ‘Tivoli Incursion’. These figures are among the worst in the world and show that the State is taking a heavy toll. In countries such as New Zealand, the police homicide rate is a mere three per 100,000 – that is 51 times less than for the Jamaican police. In New Zealand and Europe, police can concentrate on community-style policing; in Jamaica, the police remain in war-readiness mode – and emotionally hold on to the protective frame of paramilitary policing. This style of policing continues to feed the anger in the inner cities, which helps to fuel gang formation. However, no one in charge of the police dare say put your weapons away when the officers are so washed with fear. Major changes must come at some point, and come soon. (See Figure 2)

Since the start of the new millennium, Jamaica has had the fourth highest average murders in the world. This is the result of centuries of oppression, combined with decades of political warring. In the work of violence experts, a history of violence is of critical importance to the construction and maintenance of feud or incessant warring. Anthropologists of social violence are usually concerned with two broad sets of impact caused by a history of violence: adaptation to violent ecologies, and socialisation and social organisation around the effectiveness of violence.

The ability of the human species to adapt to environments is well documented; but the work of Dawkins (1976) is critical to our understanding here of how aggression is critically necessary for our survival, and how each group of persons pass on the variant gene that has the greatest advantage for survival in a specific environment, including violent ones. In other words, the efficacy of violence is now in our genes. We know how to use it to achieve political and economic ends, and even to end domestic disputes. The figures below (Figure 3) show that while the Tivoli Incursion had done much to restore some power in the state’s apparatus, murders have simply been fluctuating. Violence is a by-product of social ills. In Jamaica, we have many, ranging from social injustice to exclusion from basic education. There is urgent need for the trained, the brave and policymakers to sit down to discuss the way forward.