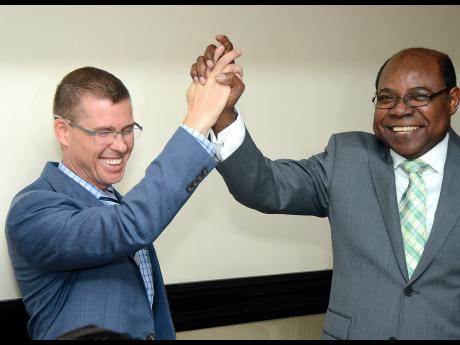 As Jamaica's tourism industry records unprecedented growth, the country's tourism minister, Edmund Bartlett, says it is "high time" for Jamaicans to tap into the many opportunities available in the booming sector. Discarding any notion that the sector was for big players only, Bartlett, while addressing key industry experts and potential investors at the Jamaica Stock Exchange (JSE) Conference at The Jamaica Pegasus in Kingston on Wednesday, asked why more small players were not getting into action and supplying the demand in the market.

"I disagree with the perception that the input of tourism is from large companies. An element that drives tourism is what I call value-added the things that the people come to enjoy, the street food, the entertainment, the craft, the attractions, the ground transportations," he stated.

According to Bartlett, enough Jamaicans were not investing in those things; however, the time was ripe for micro-tourism entities to become part of the large networks.

Stewart, who is also chief executive officer of Sandals and Beaches Resort, in an opinion piece released on Saturday, January 21, said it was time to look beyond tourism as "just visitors to our shores", and be informed about how the sector fuels the island's domestic economy.

"Poised for more growth, we must focus our attention on the imperative of harnessing the full benefits of the sector to the domestic economy," Stewart stated, pointing out that economic growth was the most powerful weapon to combat poverty, thereby improving the quality of life of Jamaicans.

"It is, therefore, time to create sustainable linkages that will ensure the tourism sector's long-term survival, is tied in to a better way of life for our people."

Citing what he described as low-hanging opportunities, the Linkages chairman said that even with the local tourism sector consumption of an estimated 1.8 million pounds of Irish potato annually, there still existed an import of 20 million pounds. Similarly, the sector consumes upwards of 3.1 million pounds of assorted berries, and although Jamaica's climate is ideal, there is no consistent local supplier.

"These are but two low-hanging opportunities that can readily support the tourism minister's stated desire to realise $5 billion earnings over five years alongside the objective of increased tourism employment to 125,000," he stated.

Bartlett, for his part, reiterated that the Tourism Linkages Network had been expanded to include five new networks that would serve to further diversify Jamaica's tourism offerings while building business opportunities and generating improvements in the competitiveness of our tourism product.

They are gastronomy, sports and entertainment, health and wellness, shopping, and knowledge.

"There are major gaps to be filled, and I encourage Jamaican investors to be cognisant of these gaps and work to fill them," he said.