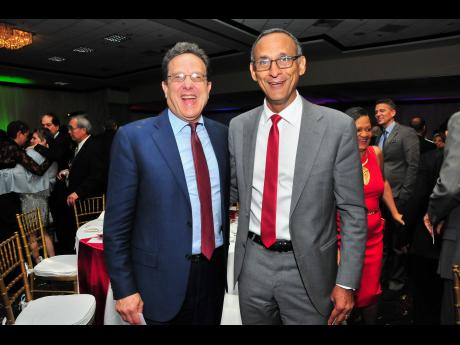 Patrick Planter
Joseph Matalon (right) and Dr Damien King are all smiles after being inducted into the Campion College Hall of Fame.

Two exemplary Jamaicans, in two similar areas of expertise, now have two more things in common: they are the latest inductees into the Campion College Hall of Fame.

Dr Damien King and Joseph Matalon were honoured at the Campion College Alumni Association's annual Hall of Fame dinner held at The Jamaica Pegasus hotel last Friday for their outstanding contribution, not only to their respective fields, but to Jamaica.

The dinner, which functions as a fundraiser to provide scholarships for qualified students in need of assistance, also sought to celebrate those from the "Campion family" who have gone on to greatness.

King, the economist, is no stranger to excellence, becoming one of the most sought-after lecturers at the University of the West Indies. But what has made King stand out over the years is his uncanny way of developing minds through economics.

King, in response to the award, stated that in everything that had been said, there was an incredible amount of kindness. "I also think that you're being nice by putting me in the company of people that I admire greatly," said King.

Matalon, who lives by the mantra "there is no place like home", said that he decided to take a chance, follow his heart, and return to Jamaica after living abroad for 10 years.

Since then, his dedication to the business, banking, and finance sectors in Jamaica, through the ICD Group and the Private Sector Organisation of Jamaica, among many others, has been nothing short of remarkable.

In his address, after the presentation, Matalon offered his congratulations to King before highlighting the good of the fundraiser.

"I think there's no better way as alumni that we can give back to our school than by giving back four scholarships to four young people to get the kind of education that we were privileged to have at Campion," said Matalon.