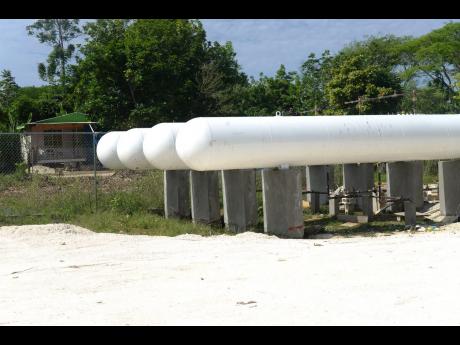 Mark Titus
The public defender has expressed concern over a decision by the Westmoreland Municipal Corporation to allow this LPG plant to be built in a residential area in Farm Pen, Llandilo, Westmoreland.

The Public defender has recommended that officials of the Westmoreland Municipal Corporation be called on to account for their conduct in the application process which saw permission being granted for the construction of a petroleum storage and liquid petroleum gas (LPG) dispensing facility and block-making plant in a residential area in the parish.

In May of last year, The Sunday Gleaner reported that residents of the section of Llandilo known as Farm Pen, in Westmoreland, were up in arms over a decision to allow the LPG facility and block-making plant to be built so close to their houses.

The matter was reported to the Office of the Public Defender and following a probe, Public Defender Arlene Harrison Henry has concluded that the Westmoreland Municipal Corporation has several questions to answer.

According to Harrison Henry, the local government body, which is chaired by Bertel Moore, should explain, among other things, its failure to respond to a letter of objection to the commercial development in the area, or to even forward the objection to the National Environment and Planning Agency (NEPA) for evaluation.

Harrison Henry has also recommended that the developer, Andrew Williams, should find a more suitable location for his LPG dispensing facility and block-making plant.

According to Harrison Henry, "The safety of the community has not been carefully considered and stands to be greatly compromised as the development has inherent hazardous features."

The Sunday Gleaner had been told by NEPA's head, Peter Knight, that his entity was advised, by way of a letter dated July 22, 2015, from the municipal corporation, that there were no objections to the development.

But Ashton Pitt, whose property is closest to the development, told our news team that he was not consulted, and had hand-delivered several letters of objection.

According to Pitt, one of these letters was hand-delivered to the chairman of the corporation but no response was received.

"The complainant has been treated unfairly and his rights were violated," said Harrison Henry in a report not yet made public but which has been seen by The Sunday Gleaner.

She argued that the municipal corporation's failure to answer Pitt's letter of objection was a dereliction of duty, and the local government body withheld material information from the NEPA.

"The processes of law and procedure offered the complainant protection but each one was bypassed. Requirements for the posting or serving of notices, public engagement, all circumvented," said the report.

Harrison Henry also recommended that no approval be granted, advanced or issued for any development on the property in question until all the impediments to such a development are removed and all legal and procedural requirements satisfied.