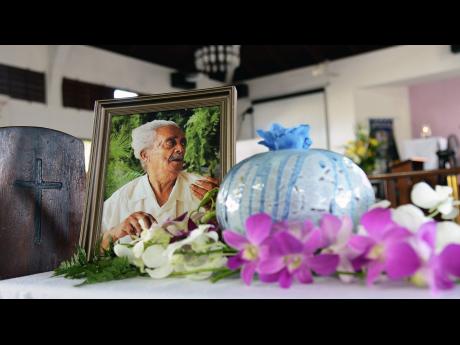 Ricardo Makyn
The urn with the remains of journalist Peter Abrahams at the thanksgiving service held at the Church of the Transfiguration, Meadowbrook, St Andrew, yesterday. 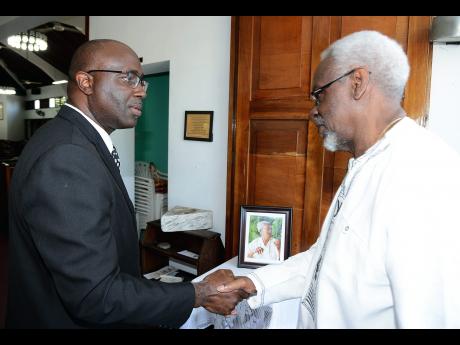 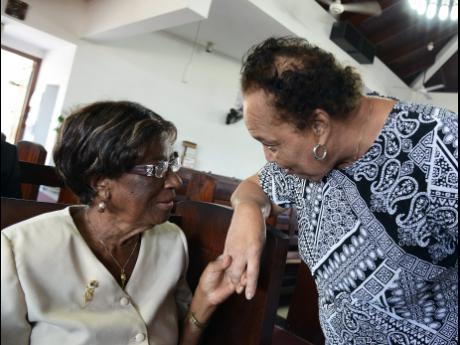 Ricardo Makyn
Janette Mowatt, former news and public affairs editor at RJR, with Barabara Gloudon at the thanksgiving service for the life of journalist Peter Abrahams, held at the Church of the Transfiguration Meadowbrook, St Andrew yesterday 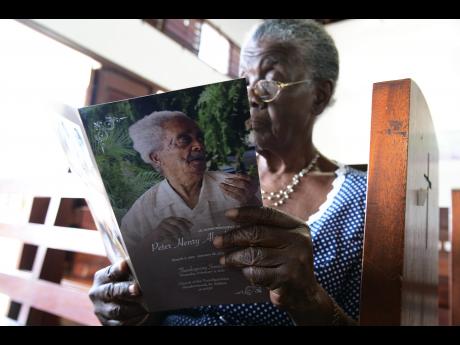 Ricardo Makyn
Thanksgiving service for the life of journalist Peter Abrahams, held at the Church of the Transfiguration Meadowbrook, St Andrew yesterday 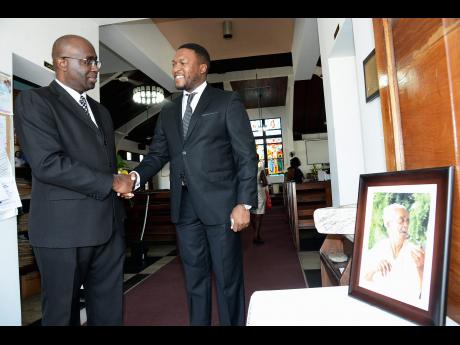 The indomitable spirit of South Africa-born Jamaican patriot Peter Henry Abrahams will continue to influence public opinion for many years via the various media channels of the RJRGLEANER Communications Group, for which he remains a living voice and template for excellence in journalism.

"We at RJRGLEANER have over 40 years of simple, straightforward, incisive, analytical journalism still relevant to us to read, re-read, re-listen and to ponder, produced by this 5-ft 7-inch giant," Group Chief Executive Officer Gary Allen disclosed during his tribute at yesterday's thanksgiving service for the life of Abrahams at the Church of the Transfiguration in Meadowbrook, St Andrew.

Born on March 3, 1919 in Vrededorp, a suburb of Johannesburg, Abrahams died in Rock Hall, St. Catherine, Jamaica, on January 18.

Allen recounted that following Abrahams' relocation to Jamaica in 1956, through journalism and other work, he helped cement Radio Jamaica's consistently credible news and current affairs status with an objective and informed view that put in proper perspective events in Jamaica, the Caribbean and elsewhere across the world.

Deeply affected by the death of his wife, Daphne, on Good Friday last year, Abrahams took it hard, then after taking stock of himself, at age 96, he embarked on a new chapter in his life. Taking a greater interest in digital media, he participated in chat rooms and even explored social media and other new communication avenues.

By Christmas Eve, when Allen visited him at home, "Peter was enjoying himself" and expressed intentions of hosting a "Christmas party for a man and a dog", and up to the time of his death, the renowned newsman's analytical skills were very much intact.

"He told me before it happened that the Government would change in Jamaica, as it did last February. He also predicted that Britain would vote to leave the European Union and said racist America will vote for Donald Trump to be president," he recalled.

"Peter's mark on Jamaica is indelible. His one dozen books are precious gifts, but his best gift was his heart for humanity and especially Jamaica."