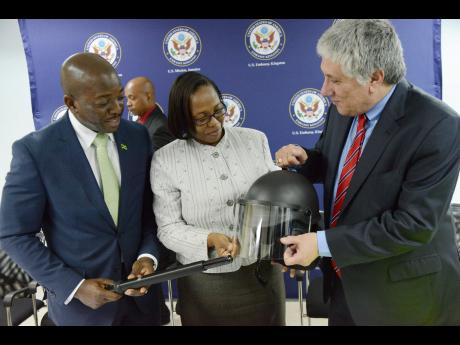 State minister in the Ministry of National Security Pearnel Charles Jr on Wednesday challenged policymakers to recognise the worth and work of correctional officers and to tap into their collective knowledge and hands-on experience in the national effort to get a realistic grip on the crime scourge.

"The litmus test for us is to reduce the murder rate, and I say time and time again, the Department of Correctional Services is a critical component of the national security strategy (for) it is the only place where there is empirical evidence that you are dealing with a group of persons that have engaged in criminal activity. everything else is speculation," the state minister declared during a presentation of non-lethal riot gear and other equipment by the United States Embassy.

The donation is part of an ongoing effort by the United States to strengthen the country's national security system by way of much-needed equipment and training opportunities for law enforcement and other security personnel.

Some correctional officers have already participated in training sessions in the United States on how to handle riots efficiently and humanely, including participating in mock riots simulations in West Virginia. The training sessions have also included train-the-trainer sessions and workshops in institutional management. In addition, almost 100 officers have undergone training with the Colorado Department of Corrections, with another 30 slated to go off in March.

Luis G. Moreno, United States Ambassador to Jamaica, used the occasion to put into perspective the purpose of the ongoing investment, with the cost of training 120 officers put at US$275,000, declaring that the "investment in Jamaica's future is worth every penny". The long-term aim is for these efforts to resonate positively well beyond the walls of the correctional centres.

... Impossible to do job without equipment

"The training and equipment (given to the Department of Correctional Services) complements the work that USAID is doing in helping to improve the lives of children and juveniles in conflict with the law by increasing their chances of successfully reintegrating back into society. This includes providing marketable technical kills, life skills, and individual psycho-social attention to enable successful reintegration. In addition, assistance is given to the correctional facility's releases (persons being released from prison) to access education, vocational, and internship employment opportunities, while providing comprehensive case management for six to 12 months after their release," Luis Moreno said.

"If only one inmate, only one, is better rehabilitated as a result of this effort, it would be worth the investment. The Department of Correctional Services can take this much further by changing the very nature of interaction between inmates and correctional officers," the US diplomat told his audience at the Department of Correctional Services' training suite, 122 East Street, downtown Kingston.

"I don't see how correctional officers could possibly begin to do their job without proper equipment. It just seems to me impossible to do. This is in the scheme of things - US$90,000 worth of equipment to the department of Correctional Services," he added.

Charles spoke to the much wider impact of the US Ambassador's ongoing efforts to help.

"You have seen the importance of protecting Jamaica, and in protecting our region and the hemisphere. You understand the cycle and the connection between the things that are being donated today and how they will impact Washington tomorrow."