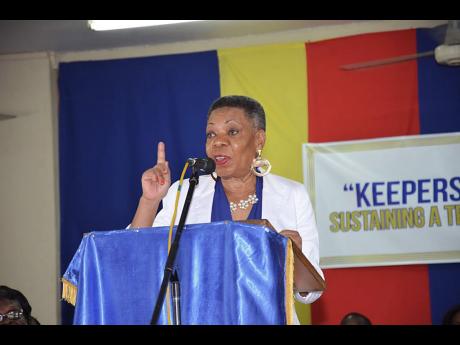 In 1942 the Reverend Lester Davy, a church minister, thought it necessary to find a space to accommodate the children of farmers in northern Clarendon. During that time of turbulence, he had the vision to establish an educational institution and so, on Sunday, February 1, 1942, he proclaimed, "tomorrow I will light a candle in Chapelton whose flames shall never be put out".

Seventy-five years later, that candle, lit atop a hill in Chapelton, still burns brightly. As part of the celebrations every year, the entire school population takes part in the symbolic march from Rose Bank - which was once a two-bedroom house where the school was started on Monday, February 2, 1942 with 10 students and two teachers - to its present location.

Principal David Wilson says the march is significant because it is symbolic of the journey from 1942 at Rose Bank to the present location. "There were hills and valleys, there were great difficulties, but at the end of it, we see great success, so we take the children back each year to do the walk. It is important that the students participate in the march because of its symbolism, and also to remember what persons before us have done. the march is also a critical part of the process because it says I took the journey," he shared.

The celebration, which started on Founder's Day, Thursday, February 2, will run all year round and culminate on February 2, 2018, with various activities planned.

Guest speaker Audrey Wright Peterman, a past student who graduated in 1970, said she was overjoyed to have been afforded the honour to give the main address.

"I'm often reminded that if I didn't go to high school here, I may never have gone to high school any at all; and I have no idea what life would have been like otherwise," she said, as she proudly declared that in December, the White House invited her along with her husband to thank them for their leadership in environmental matters in the United States.

Wright Peterman, an author and environmentalist, used her presentation to remind the young people of the opportunity they have being at Clarendon College, and how to make the most of it. Using the example of her own life, she talked about how she was constantly late while her husband believed in always being early, because being late is considered a disrespect of other people's time.