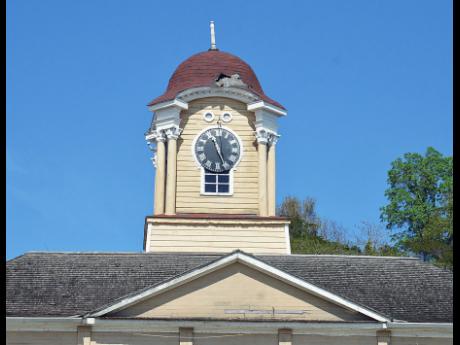 Claudia Gardner
The shingles are falling off the roof of the 200-year-old Lucea Town Hall clock which is a national monument in Hanover. 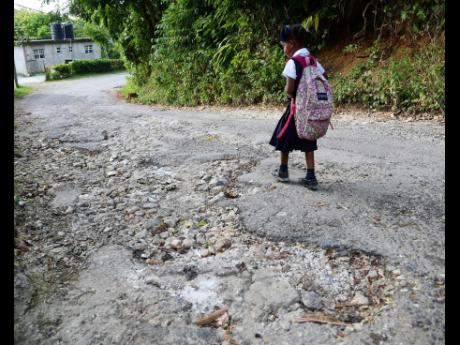 Ian Allen
A little girl walking along the bad road that leads to Blenheim, the birthplace of National Hero, Sir Alexander Bustamante 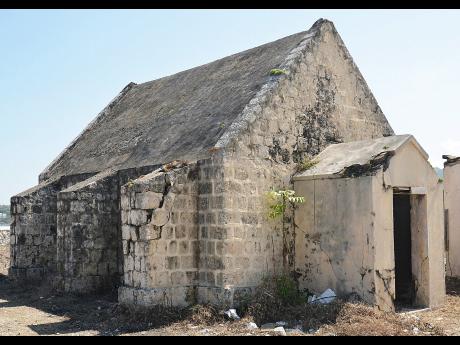 Claudia Gardner
The British military armoury at Fort Charlotte in Lucea, has not been maintained since the fort was officially declared a national heritage site.
1
2
3

The problem of heritage sites in Hanover falling into disrepair is a worrying concern for some of the major players in the parish, including the chairman of the Hanover Municipal Corporation, Sheridan Samuels.

According to Samuels, of particular concern are the 256-year-old Fort Charlotte, where the cannons and rails are crumbling daily; the road leading to Blenheim, the birthplace of National Hero Sir Alexander Bustamante; and the Lucea Town Hall, which have all been ignored for many years by the Jamaica National Heritage Trust (JNHT).

"The JNHT is neglecting Hanover, because it does not make any sense we have buildings being designated heritage sites and at the same time you don't give us anything to maintain them. These buildings have been in a dilapidated condition for years," Samuels told The Sunday Gleaner.

"There is a group here that has been seeking funding for more than two years now, and they have received and got commitments, good promises to move forward, only to hear at a meeting last week that heritage trust has some concerns and want to search for a fabled tunnel," added Samuels.

The JNHT's List of Declared Sites and Monuments cites eight properties in Hanover.

Tamarind Lodge, which was obliterated by Hurricane Gilbert in 1988, is still listed by the JNHT as a "building of architectural and historic interest".

Under the law, the JNHT is responsible for the declaration and maintenance of heritage sites.

Where a monument is falling into disrepair, the JNHT is mandated to "provide assistance, whether financial or otherwise, to the owners of such sites for the purpose of maintaining" or to undertake the maintenance of the monument itself.

According to Samuels, the leadership of the JNHT may have to visit the sites in Hanover very soon, as even Bustamante's birthplace has been shown little regard.

"For years we have to be seeking money from the local government ministry to do the remedial works to the roadway there. He was the first prime minister, and there is no proper access to the house because of the road condition.

"We need to get the relevant agencies like JNHT, that is not doing anything, to come and repair the road that leads to the former prime minister and national hero's birthplace," said Samuels.

"I am not aware of whether they are maintaining the property. I know I went there one time and saw a part of it cut, but I can assure you, every year this time, they start cutting and create excitement and everything. Wait until 'Busta's' birthday, you will see it cut, but give it six weeks when grass start grow up and you will see the condition that it is in.

"They need to come and look at the sites in Hanover because they have been ignoring Hanover ... give us the necessary funding to keep the ones here in a condition so that tourists can start visiting. We want them to come down and help but not come down and stop anything, and also repair the buildings that they have," added Samuels.

In the meantime, tour operator Norbert G. McPherson said Hanover is losing potential revenue as the heritage sites, if properly maintained, could be 'tourist magnets'.

"I am really not impressed with the JNHT as it pertains to Hanover. The agency has paid scant regard to the Bustamante heritage site. The road to the heritage site is in a very dilapidated state.

"It is an attraction that can earn a lot of revenue for the community, which is poor, and if you have tourists going there, lots of people would benefit as tourists are always interested in the heritage of small communities," said McPherson.

A 2005 study titled 'Living in the Past: Protecting Heritage and Culture', which was published by the National Environmental Societies Trust, listed major weaknesses in the management of Jamaica's historical assets.

According to the study, there was "inadequate communication between JNHT and other institutions mandated with development of heritage and culture and communities in which declared sites are located".

The study further said: "The JNHT seems to be a more reactive than proactive organisation in terms of its mandate. Many residents have stated categorically that the JNHT acts only when owners of historic sites want to demolish old buildings in order to construct new structures.

"It has also been said that while the JNHT is mandated to declare places national monuments, there is inadequate resources to follow through and maintain them. Additionally, one person declared that the current procedure for managing Jamaica's historic and cultural assets is good up until the point of declaration, but not in terms of sustaining and managing these sites."