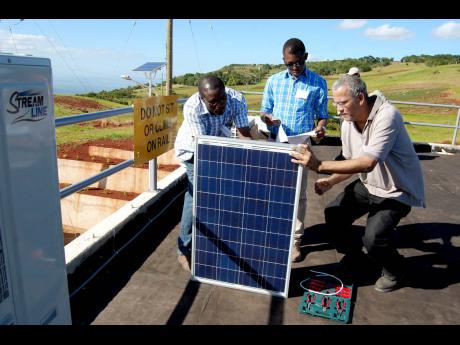 As the debate intensifies over the possible rate increases which could face Jamaicans as more and more customers leave the Jamaica Public Service Company's (JPS) grid, there are calls for a collaborative approach to the issue.

Manager of the Grid Performance Department at the JPS, Lincoy Small, says the various stakeholders must engage in dialogue to find an approach to provide the cheapest source of electricity to Jamaicans.

According to Small, it cannot be a matter of either renewable energy (RE) or staying on the JPS grid but a combination of the two.

His comments came as Robert Wright, president of the Jamaica Solar Energy Association, told The Sunday Gleaner he has no desire for Jamaicans to leave the JPS grid.

Wright said he strongly believes RE should be maximised and not just limited to large systems scattered across the island, but smaller systems distributed right across the country.

"When you have these smaller systems spread across the country it provides for better grid stability, and also it allows for more people to participate in clean energy as opposed to simply relying on large solar farms," said Wright.

But Small said, based on experience due to the unpredictability of RE, the JPS sometimes has to resort to load shedding when customers jump on and off the grid.

He reiterated that JPS's customers could face additional cost if the impact of RE on the grid is not handled carefully.

"So we are accepting solar power from the customers and as soon as something happens it drops off, and does so much quicker than the grid can even respond on some of those occasions, and as a result you have to be running expensive machines that are quicker to deal with those sun drop-offs or have to shed people's light," argued Small.

"And if you run these expensive machines or shed people's light it means the overall cost to run the grid is going to be absorbed by the customer; you are going to have to pay for a more expensive energy source."

The JPS executive said the company is actively seeking to incorporate new technology to deal with the loss of the intermittent renewable resources.

But Wright argued that the good news for Jamaicans is that the cost of RE is declining rapidly, enabling it to compete with traditional sources of energy.

"A system that a typical household would need in Jamaica two years ago would cost $1 million; that same system today cost $500,000, so we have seen a significant drop in prices," said Wright.

"Also what is revolutionary is that the cost of batteries has gone down a lot, so now, even more than before, we will be able to offer that to residential customers at an affordable price.

"What is becoming more available now are systems called micro-inverters, and these allow you to install a very simple rooftop system which is cheaper, faster to install and is more appropriate for affordable housing developments, and so on."

But Small countered that with solar and wind on average only available for 20 and 35 per cent of the day, respectively, and the cost of buying and replacing batteries being expensive, it might be cheaper for customers to get their power from the JPS grid when RE is not available.

"It (solar) is a good thing to have, but it cannot be operated in isolation, and that is something a lot of people in the solar business not telling their customers," said Small.

"Plus, you will have to be replacing the battery every two to three years for full value, and batteries cost much more than solar panels."

Small said the JPS is focused on supplying power as cheaply as possible so persons can take the cheap power from the grid rather than go buy a battery and use the solar power and the wind when it is available.

With Jamaica being a signatory to the Paris Climate Change Agreement, the utilisation of more RE forms part of the National Energy Policy which sees the country aiming to have 30 per cent RE penetration by 2030.

The country is currently at approximately 10 per cent of the quota, with roughly 300 net billing customers (those who have solar systems which allows them to consume energy and sell surplus) and around 10 larger customers.