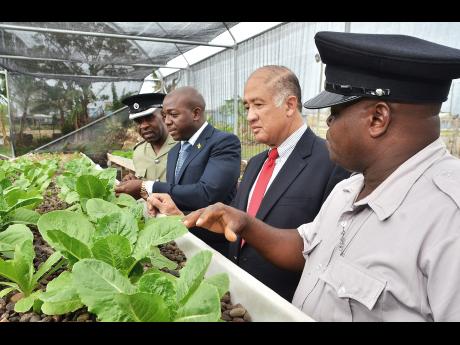 Inmates at the Tamarind Farm Adult Correctional Centre in St Catherine will now be trained in modern agricultural techniques as part of their rehabilitation process. On Monday, a greenhouse project, sponsored by Carib Cement Company Limited, was handed over to the prison.

In the initial stage, 10 inmates at the centre were trained in modern agricultural techniques to manage the greenhouse.

Minister of State in the Ministry of National Security, Senator Pearnel Charles Jr, who spoke at the ceremony, said based on the success of the pilot project, the programme will be replicated in other correctional facilities across the island.

He commended Carib Cement for its contribution and urged other corporate entities to participate in similar initiatives that encourage national development.

The state minister said the initiative is important, as it will contribute to the rehabilitation of inmates and the drive to ensure the country's food security.

"In 2017, Jamaica must become a country that appreciates and implements projects related to sustainability and food security," he argued.

For the first phase, the US$20,000 project will serve as a rehabilitative tool for inmates, while providing life skills through training in farming technology.

Inmates with less than eight months of their sentence left were selected based on their interest in agriculture, the ability to read and write, and their commitment to completing the programme.

Some 20 correctional officers also received practical and theoretical training in the greenhouse project, which utilises best practices in hydroponic farming.

As part of the training, the group toured the Miranda Greenhouse project in St Ann and the Abbey Garden farm in Manchester.

The initiative also aims to assist in the reintegration of inmates into society by providing them with the requisite skills to become entrepreneurs after their release from the correctional facility.

It is expected that the project will become a sustainable, income-generating venture and also provide vegetables to supplement the inmates' diet.

It is anticipated that the Tamarind Farm Greenhouse Project will yield:

- 600 pounds of cabbage every eight weeks.

- 400 pounds of lettuce every six weeks.