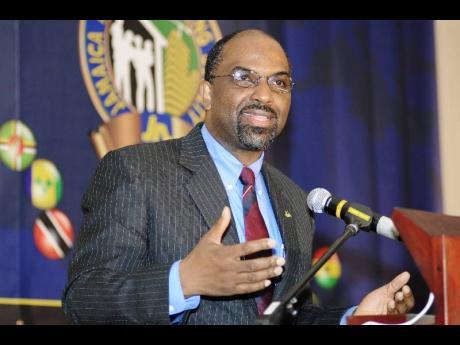 The government is being urged to reduce the import duties on technologies and equipment that enhance the efficient use and conservation of water.

Earl Jarrett, CEO of the Jamaica National Group, argued that reducing import duties on such technologies and equipment would promote conservation and efficient water use, while assisting the country to be resilient against the effects of climate change.

Jarrett was speaking at the signing of an agreement on Friday with the Inter-American Development Bank (IDB), which is providing US$5.75 million in loan funding for on-lending by JN Bank to housing developers that incorporate water efficient technologies in their developments.

“When you look at the low flush toilets and the difference in volumes used in comparison to a high volume toilet, you’re talking about up to four gallons of water as the savings that you’d have,” explained Onika Miller, managing director of MCS - a subsidiary of the JN Group.

"When we examine the public policy dimensions, there is a lot more that we can do to promote water adaptation and water conservation,” she said further to support Jarrett's call for a reduction in the import duties on water conservation technologies and equipment.

In response, Dr Horace Chang, minister without portfolio in the Office of the Prime Minister with responsibility for water and housing, who was present at the signing said the suggestion would complement the government's push for more private sector leadership in development initiatives.

“I’ll be having discussions with my colleagues to see what policy shifts we can make to encourage these kinds of activities and ensure they succeed,” said Chang.