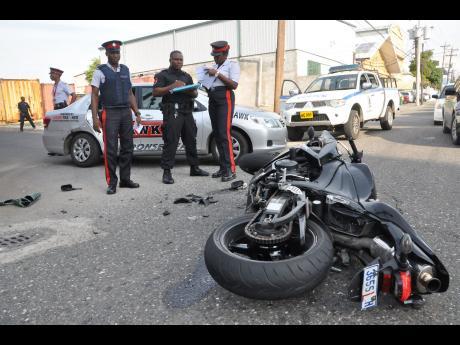 Authorities are reporting that motorcycle fatalities are trending down compared to last year.

Data from the Jamaica Constabulary Force Highway and Traffic Division show that 17 fewer motorcyclists have died on the nation’s roads since the beginning of the year, compared to the corresponding period in 2016.

According to the data, up to Thursday, March 16, some 19 motorcyclists had been killed, compared with 36 over the similar period in 2016.

That a decrease of almost 50 per cent.

Paula Fletcher, the executive director of the National Road Safety Council (NRSC), reportedly told JIS News that the decline in motorcycle deaths and crashes coincides with NRSC’s partnership with the Back to Basics Motorcycle Safety Mission to implement a biker safety awareness programme.

She explains that the social intervention programme involves going into communities to sensitise them on the issues related to the spike in motorcycle deaths over the past four years.

She says workshops for motorcyclists are being staged in Kingston, Westmoreland, St. Ann and St. Elizabeth, which are the parishes most affected by motorcycle crashes.

Mrs Fletcher says in the workshops, the operators are taught the safety gears, techniques and precautionary measures necessary to operate on the roads in a responsible manner.