Doctor’s Advice | He won’t take no 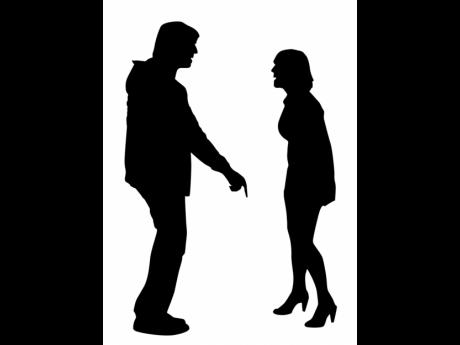 Q.  Doc, I am 18 and female. I went out a few times with a young guy from Kingston. I did not like him too much, and sex with him was terrible! He kept hurting me, though I am not sure that he meant to.

So after a couple of weeks, I dumped him. Since then I have found a much, much nicer boy. Sex with him is great. I love him. And he says he loves me,

But the first guy just don’t seem to accept that it is OVER! I keep getting texts from him saying that we were ‘made for each other’. He claims that he loves me and that ‘no-one else will have me’.

Worse than that, doc, he has started making threats against me. He has sent me some texts saying things like he will ‘cut my throat’ if I go with anyone else. Surely he must be joking?

Maybe I should meet him, and talk things over? But I am a little frightened, doc. Should I tell my new boyfriend about these threats?


A. Most definitely. You should also tell the POLICE. Make copies of those threatening texts and emails, and show them to an officer at your local police station.

Please do not take these threats lightly. You are in some danger. Unfortunately, the fact is that a few people (usually males, but not always so) just cannot believe it when a relationship is over. They are totally obsessed with the ‘beloved’, and in certain cases will actually commit violence, in order to prevent anyone else from having her.

Psychologists usually call this mental state ‘obsessive love disorder’. And there is no doubt that your former boyfriend has it. If he continues like this, you might have to take out a legal injunction against him, to try to stop him bothering you. Meanwhile, do NOT agree to meet him. That would be too dangerous.

So, you should definitely tell your new boyfriend about all this, and also your family. But the most important thing is to inform the cops. Good luck.

Q. I am engaged to a beautiful girl, but I am a little puzzled that she does not orgasm at the same moment as me, doc. Is this abnormal?

A. No, it isn’t. Here is a fact that many young people find rather surprising: throughout the world, the majority of acts of sexual intercourse do NOT end in simultaneous orgasms!

You see, it is more difficult for a female than a male to reach a climax. Unfortunately, women quite often don’t reach orgasm at all during intercourse. But a guy who is loving and caring and sexually knowledgeable can usually manage to bring his partner to orgasm – especially if he understands how to stimulate her clitoris, using love play ‘finger techniques’.

Happily, a lot of couples who have been together for a while do get to know each other’s bodies, and learn to climax at the same moment. But this is uncommon among young people who don’t know each other all that well yet.

So your fiancée is not abnormal in any way. As your relationship proceeds, I would expect that you gradually learn to synchronise your climaxes. I wish you both well.

Q. I have now been on the Pill for two years. Is it time that I took a break, doc?

A. No. A lot people have the idea that a young woman should ‘take a break from the Pill’. But this is really not necessary.

Q. A boy who lives a long way from me has been texting me. We seem to be getting along real well, although we have not met.

But now he has asked me to send him one or two nude photographs of myself.  Should I agree?

A. Definitely not. In my opinion, this new craze for sending nude photos to people is asking for trouble. One recent study suggested that young men are very likely to show these intimate pictures to their friends. Or they may put them up on the net for anyone to see.

There have also been cases where girls who took nude photos of themselves have ended up as victims of blackmail, and thus suffered a great deal of distress. My advice: have nothing to do with taking and sending of naked pictures.

Q.   I am on the Pill, but my doc wants me to go on the Mini-Pill instead. Is it true that this can be bad for the complexion, doctor?

A. Most young women do NOT get any side-effects when they go on the Mini-Pill (progestogen-only Pill or POP).

But a few do develop facial spots. If this happens, you could just ask your doc to switch you to a next brand.

Q. I don’t feel I am satisfying my girlfriend, doc. On the internet, I saw an ad for some tablets which are guaranteed to give a guy a longer penis. Should I try these?

A. These ads are quite crazy. I have just seen one which says ‘Increase your length by 10 inches in 10 days!’ That is clearly impossible.

Please: don’t believe all this foolishness. In fact, there are NO tablets that will give you a longer penis. The advertisers just want your money.

I am sorry that you feel that you are not satisfying your girlfriend. Why don’t you sit down with her and have a serious talk about what she wants in bed? One thing I can assure that she will NOT want is a longer penis.

Two weeks ago, I had sex with a guy in Portland, while I was spending the night there. I wish I had not done it.

Now I am feeling kind of sore ‘down below’ and there is more discharge than I usually have. Please help me.

A. Unfortunately, casual sex does often give people sexually-transmitted infections (STIs). And in young women, these infections often produce no symptoms at all – or only vague ones.

I cannot make a diagnosis on the basis of your symptoms. But I am quite sure that you should go to a doctor or clinic this week, and do some tests. Meantime, please do NOT have sex.

Q. I am a guy with a pretty active sex life. In fact, doc, at the moment I have three girlfriends – one in the Corporate Area and two in the country.

But I am wondering. Could all this sex be bad for my health?

A. Just having a lot of sex cannot be ‘bad for your health’.

However, please consider the risks you are running . If any of these three young ladies has another lover, and catches an STI from him, then YOU are going to get it. And you will probably pass it in to the two other girls!

Also, if you are not real careful, you are shortly going to find yourself a baby-father. Indeed, you might well discover that you are the daddy of THREE bouncing babies!

So please: consider ‘cutting down’ to just one girlfriend. And meanwhile, please use condoms – every single time.