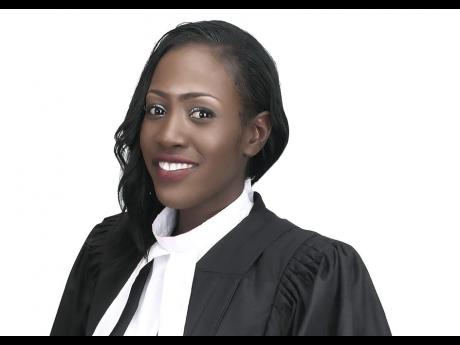 Attorney-at-Law Shanika Sutton recently boldly professed that the God she serves is undoubtedly a God of His Word who possess the ability to turn around any situation, regardless of how gloomy it seems at first.

Recalling how hard she worked to earn her credentials, Sutton has been using her story as a testimony of God's faithfulness.

She completed her law degree at the University of Technology and in order to further her pursuit of becoming a lawyer, she had to sit an entrance test to be admitted at law school, a test she failed three times.

"When I sat the exam for the first time and wasn't successful, I was confused and embarrassed, but God had another plan, He led me into part-time teaching that year.

"The second time I didn't make it, I was distraught. It was the first time in my life I felt such grief and disappointment. I thought God forgot me even after serving Him and living by His commandments. However, God sent me a word that brought me comfort, He said: 'Next year is your time!'. He even told me the date, which was September 9, 2014," she recalled, also noting that further confirmation came through a prophetess, who prophesied of her imminent success as a lawyer.

But despite this and the direct word she believed she got from the Lord, Sutton told Family and Religion that she again failed the exam the following year.

"I tried to understand with my natural eyes, but it didn't make sense. Why would God make me a promise then allow me to fail? I even considered the possibility of being accepted if there were more spaces, however, I was competing with hundreds of people.

"The grades were released in August, so I thought maybe September 9, I would hear something, like He showed me before, however, the 9th passed! Of course, I reminded God that He told me in His word that He cannot lie. Little did I know I did get accepted on the 9th. I just didn't know until the 11th!" she revealed.

Sutton, who successfully completed law school in 2016, is now an attorney-at-law and a college lecturer.

"I only wanted to practise law, but through my disappointment, God led me into teaching, and with years of experience as a teacher, God provided a job for me as a lecturer.

"I learnt from this experience that God will do exactly what He said He will do, even if the situation does not match up to the promise He made you. I failed a highly competitive exam, but my God is a promise keeper and He uses our disappointments for our good and for His glory," she testified.