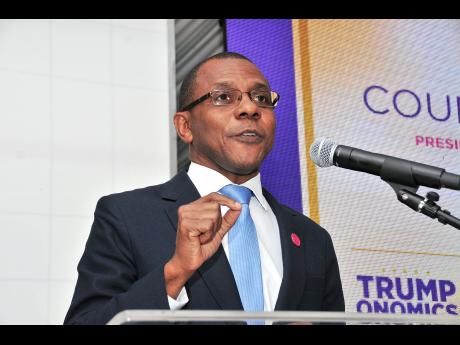 The Victoria Mutual Group will be training University of the West Indies Students Today Alumni Tomorrow (STAT) ambassadors, Mona corps to become financial advisers to assist other students at the Mona campus to improve their financial knowledge, which will ultimately encourage financial independence.

The announcement was made recently by Courtney Campbell, president and chief executive officer of the Victoria Mutual Group, who was speaking at the UWI STAT alumni cocktail reception, held at the UWI Regional Headquarters in Mona, St Andrew.

In response to Campbell's announcement, Celia Davidson Francis, director of alumni relations at the UWI, with responsibility for the regional corps of UWI STAT, expressed delight with the prospects and pledged her support.

"I want to thank Mr Campbell and Victoria Mutual for assisting with the staging of the alumni cocktail, allowing the corps to highlight both its alumni engagement and philanthropic mandates, and to encourage alumni to 'give forward' to UWI students," Francis said.

The cocktail reception, which aimed to raise funds for a UWI STAT bursary, also honoured Campbell for his mentorship as a corporate champion for its Mona corps.

According to Christina Plummer, president of the UWI STAT Mona corps, the bursary will be awarded to an outstanding student of the university who has displayed exceptional academic prowess but faces financial challenges.

The UWI STAT regional corps is an 11- year-old programme designed to recruit exceptional students who are committed to giving service and exercising leadership to their country and to the Caribbean community.