All set for middle managers' conference 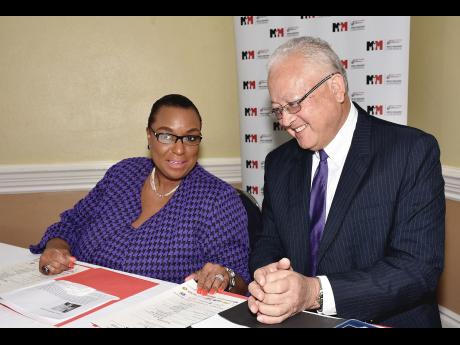 Contributed
Minister of Justice Delroy Chuck (right) and Managing Director of Make Your Mark Consultants Jacqueline Coke-Lloyd in discussion at the launch of the 2017 Middle Managers’ Conference.

An in-depth look at the evolving role of middle managers in the global marketplace is among several topics to be addressed at this year's staging of the annual Make Your Mark Consultants (MYMC) Middle Managers' Conference.

The conference is set to take place on April 25 and 26 at The Jamaica Pegasus hotel in New Kingston. Participants will hear from speakers from the private sector, academia, the Government and entrepreneurs.

According to Jacqueline Coke-Lloyd, principal director at MYMC, the conference is expected to outline the skill sets and expertise needed for effective management to take place.

"The research is now showing that the middle manager is actually the entrepreneur in the organisation. They are the ones who will drive innovation and change. A number of our sessions are geared towards highlighting these changes. We want to ensure that the middle managers understand the role of influencing, networking and team work," said Coke-Lloyd.

"The role of the middle manager mirrors what a general manager used to do, therefore, higher-level skill sets are required from these leaders," she added.

Coke-Lloyd argued that middle managers have to effectively communicate ideas between the staff and the executive.

"Their role is to influence up and down the organisation, to manage change and talent, execute and innovate. It is important to note also that a number of the changing products and ideas are coming from the staff, which needs to be interpreted and taken to the board or executive. Their role has changed tremendously.

"At the end of the conference, we would want the managers to see themselves as leaders, armed with information and knowledge to execute vision, drive innovation and influence culture and performance," said Coke-Lloyd.

Among the persons slated for the conference are international guests Agnes Cishek, general manager of Sinecorp and a consultant with a practice of 12 years working with projects in the Caribbean and Latin America, and Clinton Wingrove, chief executive officer and principal consultant of HR Clinton.

Local speakers will include P.B. Scott, president of the Private Sector Organisation of Jamaica, Education Minister Ruel Reid, and Gail Abrahams, chief executive officer of the American Chamber of Commerce.