Dr Herbert Gayle | Who is dying violently in Jamaica? 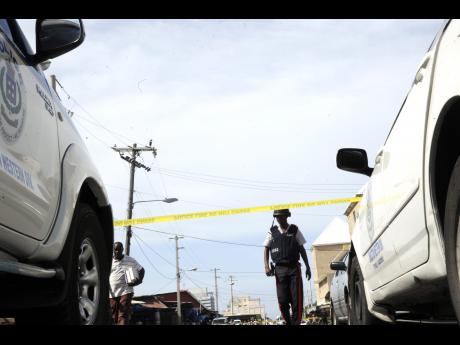 File
A policeman walks near a crime scene in downtown Kingston in 2013.

In this profile, the focus is on gender and age. While the main objective is to provide you with the result of hours of calculations, we shall also take the time to provide brief explanations. Despite the reality in Jamaica that gender carries abnormal velocities of emotion, we expect the figures to speak for themselves. The data we are using for this profile of victims come from the Statistics and Information Management Unit of the police force. The data used here are for the trench years of 2011-2015. This means that we start with the year after the Tivoli invasion and end with the year that the gangs resurfaced in near-full force.

Undoubtedly, the Tivoli invasion helped to create a trench (dip for 3.5 years) in the number of murders in Jamaica. Put another way, the average homicide rate for Jamaica since the year 2000 is 48 per 100,000. However, the average homicide for the ‘trench years’ is 42 per 100,000 (2011 is 42; 2012 is 41; 2013 is 44; 2014 is 37, and 2015 is 44). The use of the ‘trench years’ data is a deliberate attempt to be conservative. It means that the reality is actually worse. Note that we calculate murder rate by dividing the actual murder figures by the population, then multiply by 100,000. In order to be accurate for age and gender by each year, we have to use the figures from the Statistical Institute of Jamaica (STATIN) and do the individual calculations based on rate of change in the population. This is hard work, but very necessary in order to be at least 99 per cent accurate.

JAMAICA SITS IN THE MOST DANGEROUS ONE OF THE WORLD

Charts 1 to 3 provide us with some comparative data on gender and homicide. The source is the United Nations Office on Drugs and Crime (UNODC) 2011 report. These figures could be confusing, so I shall explain them a bit. First, the average homicide for the world is 9 per 100,000. Note that Jamaica’s average homicide of 48 per 100,000 is over five times the world’s average. At 9 per 100,000 (the average for the world), women make up 18 per cent of victims of homicide (Chart 1). We shall call this the norm.

Second, the homicide rate for Europe is usually just above 2 per 100,000. This is over four times more peaceful than the world (or norm). However, the proportion of women as victims of homicide jumps from 18 per cent (world’s average) to 27 per cent (1.5 times higher than the norm), as shown in Chart 2. This seems paradoxical. In peaceful, stable countries such as in the North, there is no tremendous effort to protect the replicator (the one who can have children), as their population is under no threat – men are not killing themselves with a velocity that concerns the frame of the human species. In these countries, therefore, we need to remind men every day to protect women. In these North countries, the primary cause of female homicide is ‘brutal patriarchy’ (domestic violence).

Third, Jamaica is located in the most violent zone of the world known as the LAC (Latin America and the Caribbean). Here the average homicide rate is 32 per 100,000. This is above the 30 per 100,000 that I have established as the civil war benchmark, rather than the 1,000 combatants that scholars used to use. Note that Jamaica (with average 48 per 100,000 since the year 2000) is 1.5 times more violent than the average of the most violent zone in the world. Chart 3 shows that females make up only 10% of homicide in the war-torn LAC. Note that this 10% represents a large number of dead women, as the number of persons killed overall is large. However, we need to explain the small proportion. In war-torn areas the species becomes threatened and this drives us neuro-biologically to protect the replicator with tremendous intensity in order for them to replace us with new births after we kill each other. After a war, replicators would have abnormal proportions of boy babies to replace the males murdered. Note also that in these violence-torn zones, men are mobilized to kill each other with such a high velocity that the people outside the frame of war (women, girls and boys below age 15) are killed less than norm. This is the main reason why men agree in war not to kill women and children. (See Charts 1-3)

The gender and age of victims of homicide in Jamaica

Table 1 and Chart 4 break down the data by gender and age for the years 2011-2015. Chart 5 provides the proportion by gender for each age group. For the period of 2011 to 2015, nine times more males than females were killed in Jamaica (5,053 males to 592 females). Note the following observations:

- The line graph (Chart 4) shows that the war is between males, specifically those of the combatant age of 15 to 34 years. However, middle-age men also suffer immensely in the war as some are involved, but especially because they are a real threat to combatants. Even in cases when they are being robbed, some fight back and get killed.

- The only males that are allowed to live in zones of high violence must be below age 15 or above age 70. This is logical, as they are either too young or too old to carry out war. However, a small proportion of them will get killed as war triggers. Combatants kill the people most protected by rules of war as part of a psychological strategy: to show the opponent that they are crazy; to get the opponent emotional, and thus intensify the war; or to make the opponent vulnerable or less strategic.

- Women are not the target of war. The greatest comparative protection is given to females of the reproductive group (15-34 years). Notice in Chart 5 that they have the lowest proportion; yet they are the most likely female group to participate directly in violence. In war zones, over a quarter (25 per cent) of women of the reproductive age are directly involved as strategists, sleepers or partners of combatants. Sleepers are those women who lure opponents to their death. Yet, there is tremendous difficulty in killing females of this group – as they are the most likely replicators who will replace the fallen. This is why they are usually killed by ‘shottas’ (psychopathic killers) and not regular combatants.

- In Jamaica’s war-torn communities, the vast majority of females who are killed are as a result of war – not brutal patriarchy branded worldwide as ‘violence against women’.