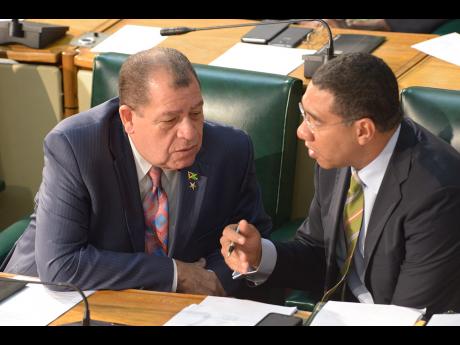 Prime Minister Andrew Holiness (right) and Minister of Finance Audley Shaw in dialogue during a sitting of Parliament on Wednesday.

A service corps to help unskilled and at-risk youth as well as establish a new route for army qualification is closer to being a reality.

The House of Representatives this afternoon approved amendments to the Defence Act to create the Jamaica National Service Corp as an arm of the Jamaica Defence Force (JDF).

Before the amendments were put to a vote, however, the Prime Minister Andrew Holness dismissed concerns from the Opposition that the general recruitment standards of the JDF would be lowered.

Holness explained that the corp will ensure under-qualified persons gain skills that would bring them closer to meeting army criteria.

The Prime Minister also said with the amendments, the army will require the consent of parents for children under 18 years old.

Opposition spokesman of education Ronald Thwaites suggested that consideration be given to a compulsory enlistment programme to help with socialisation of children.

He added that the army should be able to help with that because the JDF is underutilised.

However, Holness rejected that claim, saying instead, that the army is stretched and does not take credit for most of its work.

Under the service enlistment, approximately 1,000 people aged 18 to 23 will be drafted annually and trained over a one-year period in military, vocational and broader life skills.

The programme is part of Holness' agenda for people to Learn, Earn a living, Give back to society and Save (LEGS).