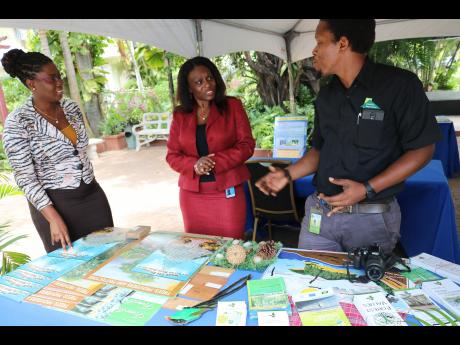 Jamaica's ratification of the Paris Agreement on Thursday, March 30, now paves the way for the implementation of a national strategy rooted in climate-change mitigation and adaptation, and the potential benefits are many, according to Clifford Mahlung, project administrator in the climate change division of the Ministry of Economic Growth and Job Creation.

"After 30 days, we have now become a party to the Paris Agreement, which means that we can participate fully and benefit fully from all the initiatives under the agreement. We can seek support to implement polices with respect to utilising the use of renewable (energy) sources to an even greater extent," he told The Gleaner yesterday.

Daryl Vaz, minister without portfolio in the Ministry of Economic Growth and Job Creation, used Tuesday's opening ceremony of the three-day symposium on climate change at the Terra Nova Hotel, St Andrew, to announce that Jamaica was now a full participant in the global effort to achieve a sustainable, low-carbon environment.

"Climate change does not discriminate between rich and poor, man or woman. We all have to work together, as we are all going to feel its effects if we do not take the steps to adapt to its impacts, and to go even further to mitigate or prevent climate change from occurring," Vaz warned.

"The unsanitary and irresponsible way we dispose of our garbage must stop," he appealed. "It is a major cause of blockage of gullies, which results in flooding during periods of heavy rainfall. It also creates a demand on scarce government fund to clear the waterways. The message must be emphasised - stop throwing your plastic bags and other waste items in the rivers and gullies."

"You must be alert, bold and creative," she charged. "But we also urge you to consider the role that can be played by the private sector through public-private partnerships. These partnerships are an important plank on the overall strategy designed to build national and community resilience to climate change."