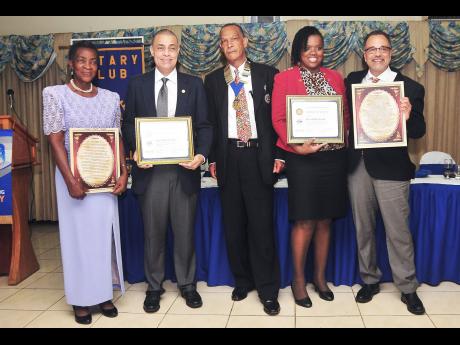 Three individuals were recently awarded by the Rotary Club of Mandeville for exemplary service to community and inspiring the change they wish to see.

Dr Paul Auden, a lover of sports, has combined his passion with his medical career by serving as coach for several institutions, including the University of the West Indies, Vere Technical High School and Munro College. He also served as volunteer medical officer for the Carifta teams between 1984 and 1993, and has travelled the world with the Jamaican athletes providing medical services to athletes, including Usain Bolt at games such as Commonwealth Games, World Junior Championships and World Indoor Champs.

He is responsible for assisting more than 200 high school students with securing sports scholarships at international universities, and currently offers medical services to athletes from several high schools. He is a member of the Jamaica Athletics Administration Association (since 1993) and served as executive member between 1993 and 1996 and 2001 to 2004.

The second awardee, Robert Cunningham, was hailed for contributing to the nation's economy. Cunningham, shortly after completing studies overseas, returned to Jamaica to join the third-generation manufacturing company Pioneer Chocolate and has led it to becoming the only cocoa processing facility in the Caribbean.

Pioneer Chocolate is a product developer and contract packer for all leading cocoa product brands, including Grace, Roma, Lasco, Caribbean Dreams and Miracle.

Cunningham was also hailed for his work in philanthropy, his seat on many boards and position in many organisations, including past president of the Rotary Club, district secretary for Rotary International, and director of the Manchester Chamber of Commerce.

Not to be outdone, the Reverend Clarister Johnson, a true woman of God who gave more than 30 years of service in the health care profession in the UK, before responding to the call of God, had to be honoured.

Since returning to Jamaica, Johnson has gone beyond the call of the Moravian Church to serve people of all denominations.