Calabar shines for youth in action 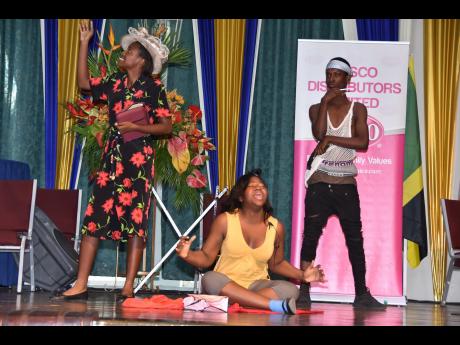 Contributed
Victoria Bennett (centre),who plays a victim of sexual abuse, cries out 'Why Me?' during St Catherine High's performance titled 'Youths grappling with crime and violence' at the 2017 LASCO Top Cop Youth in Action against Crime and Violence Project Day at Family Church on the Rock on Tuesday, March 28, 2017. Joining her on stage are Andre McLaughlin (left), who plays a criminal and Shynnae Miller (right), who plays a scammer.

Calabar High School students earned first place in the 2017 LASCO/JCF Police of the Year Competition’s Youth in Action Project held recently at the Family Church on the Rock in St Andrew.

The initiative, which served as part of the weeklong series of activities at the national level in the LASCO/JCF Police of the Year Competition, was created in response to the spike in crime, especially those related to gender-based violence.

The 2017 LASCO Top Cop finalists were tasked with engaging nine secondary schools from Kingston, St Andrew and St Catherine in demonstrating how community-based policing can positively impact or resolve violent situations through the performing arts.

Five students from each school utilised skits, song, dance and movement among other talents to take the audience and judges on a thrilling, engaging and emotional five-minute journey of the disconnect that incites violence in our nation.

According to LASCO brand manager, Renee Rose projects like Youth in Action for the LASCO Top Cop finalists  cement the relevance of the Police of the Year programme.

“Projects like these are the pride and joy of LASCO’s corporate programmes. We get to break down barriers for Jamaican youth and the police and witness honest self expression while seeking positive results and solutions together outside the traditional office space,” Rose said.

The Calabar students, under the direction of the school’s dean of discipline, Canute Fagan and LASCO Top Cop finalist Corporal Kevron Miller performed an enlightening poem called ‘Will the Real Man Please Stand Up’, which addressed prevalent issues faced in Jamaica such as murder, domestic violence and sexual abuse against women.

“It was such a powerful message to share with violence against women being a huge concern in our country and being an all boys institution we are happy that we could come out on top while still sending this message,” Fagan said.

The top three teams and a chaperone will be given the opportunity to attend the LASCO Top Cop Awards ceremony which will be held on April 24.