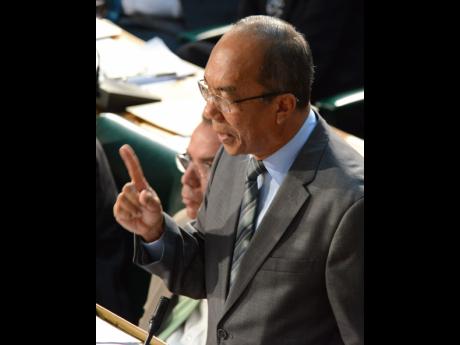 The Government is making significant strides in safeguarding the country’s energy security through fuel diversification.

Minister without Portfolio in the Ministry of Economic Growth and Job Creation, Dr Horace Chang, says much has been done in this area, which has been identified as critical to national development.

Speaking at a seminar titled, ‘Uncut Conversations on Climate Change... Dialogue for the Future’, at the Terra Nova All-Suite Hotel in Kingston on Wednesday, Dr Chang said the focus on energy diversification includes the use of renewable options that are sustainable, in keeping with national efforts to combat and reduce the effects of climate change.

“We have introduced liquefied natural gas (LNG)... and we have expanded and increased our use of solar energy. Even as we continue to promote this activity, we are looking to see how we can get waste-to-energy activities going. We are also looking at hydropower.

All of that combined will give us a more sustainable framework for energy, which we are pursuing aggressively as a country,” the minister explained.

Additionally, the Government has commenced the preparation of an emissions policy, for which a draft is slated to be presented to the Cabinet later this year.

There is also the 2015 Intended Nationally Determined Contributions that was set within the framework of the National Energy Policy 2009 to 2030.

The goals and strategies underpinning this policy, which was promulgated in 2010, support the Climate Change Policy Framework.

“These frameworks also address the supply and demand issues the country faces, which sees the Government focusing on seven priority areas,” the Minister said.

These include security of energy supply through diversification of fuels, as well as development of renewables; modernising the country’s energy infrastructure; development of renewable energy sources such as solar and hydro; energy conservation and efficiency; development of a comprehensive governance/regulatory framework; enabling government ministries, departments and agencies to be models/leaders for the rest of society in terms of energy management; and eco-efficiency in industries.

It is anticipated that focusing on these policy frameworks will ensure that Jamaica minimises the effects of volatile market activities, takes advantage of renewable resources and promotes conservation and efficiency in the use of energy resources among all sectors of the society.

Achievements in these areas will allow for an improved competitive base for the country, as well as sustainable growth and development of the nation, the minister noted.

He added that increased use of renewable energy will also help to lower the level of air pollution and reduce the national carbon footprint, resulting in better compliance with international conventions on climate change.