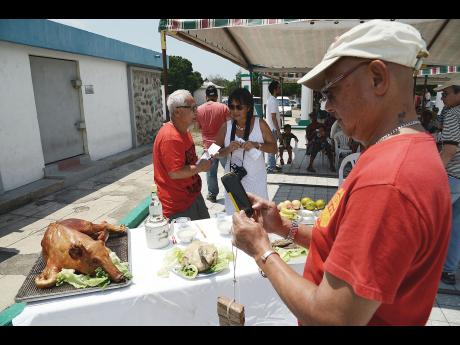 Ricardo Makyn
Food is a major part of the Gah San celebration and pictures to record the feast just had to be captured. 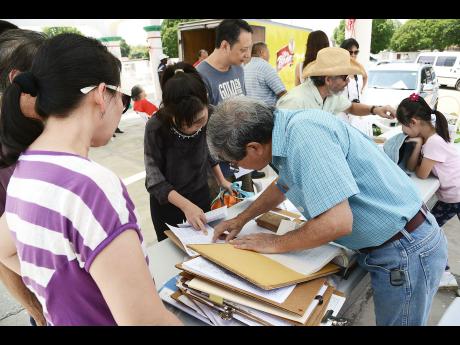 Ricardo Makyn
Persons checking the records to locate the graves of their relatives at the Chinese Cemetery during the annual Gah San ceremony last Sunday. 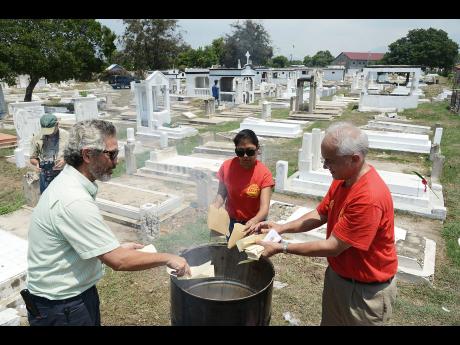 Ricardo Makyn
Vincent Chang (left), past president of the Chinese Benevolent Association, with Yanique Lee and Robert Hew light paper representing money and messages to the dead at the annual Gah San ceremony held at the Chinese Cemetery last Sunday.
1
2
3

For Jamaicans with African heritage, it is the 'wake', 'nine-night' or 'set-up'; for those Jamaicans with Chinese ancestry, it is Gah San, the annual tribute to the ancestors.

During Gah San, members of the Chinese community visit the graves of their ancestors to appease them and seek their guidance.

"We make offerings of food and incense and our ancestors' favourite drink, so white rum is dispensed. Chinese people traditionally are relatively superstitious, so they pray to ancestors, give gifts and ask them for gifts in return," Robert Hew, vice-president of the Chinese Benevolent Association (CBA), told The Sunday Gleaner last week as members of the community marked Gah San 2017.

"Chinese traditionally liked gambling. The lotto comes from the Chinese drop pan 100 years ago. They were always looking to get good luck, whether it is a game of chance or in business," added Hew.

Their ancestors were brought to Jamaica in 1849 as indentured servants, to work on the sugar plantations, but unlike enslaved Africans, who had their customs and traditional rituals suppressed by their owners, the Chinese enjoyed a different story.

Gah San is one tradition that has endured the test of time, and it was at the tradition venue, the Chinese Cemetery on Waltham Park Road in St Andrew, that it was observed last Sunday.

According to Hew, ancient Chinese religious customs are very important to their success.

"A lot of these things developed from Confucianism and from Dowie. That is the basis of our Chinese mentality. Some people see it as religion vs philosophy, but I know it permeates a lot of the ways the Chinese think about their work.

"You will notice that fish, chicken, pork, vegetables and liquor (are offered). They were designed to show richness. In our ancestors' days, those kinds of meat were real luxuries. So to them, we make this special effort to give these gifts," said Hew.

Past president of the CBA, Vincent Chang, said that carrying on the tradition wherever the Chinese settle is critical.

"This is very important because we must remember where we are coming from, so that we can appreciate when we go elsewhere. In other words, we must know who our ancestors were, and what they endured, therefore, we must carry on.

"Do you notice that all the graves are turned in one direction? That is because our custom says it's the foot to the east and the head to the west."

According to Chang, exploding fire crackers is usually symbolic of chasing evil spirits away, and the explosions were loud and clear last Sunday.

Chinese-Jamaican business woman Beverly Lopez, who has some members of family buried at the cemetery, said she had to be at Gah San to pay respect to her people.

"I am here to visit the graves of my family. My mother is buried here, as well as my uncle and my grandfather. It's a way of coming in and paying respect to my family.

"We have to carry out the rituals because it is our heritage. We must do what we must. I think the CBA has decided to carry forward the heritage," said Lopez.

Eugene Kelly, councillor for the Whitfield Town division, who was present at the ceremony, was impressed by the respect the Chinese show for their dead.

"The cemetery is 100 years old and when the story is written about Whitfield Town it will play a part. Since we came from Africa, a lot of our traditions died on the journey," said Kelly, as he underscored the impact that the annual celebration has on residents of the communities surrounding the cemetery.

"This festival is important in a number of ways in terms of the locals. There is the economics. In terms of assisting with touching up and fixing up the graves for the families to visit. It is also an opportunity for the locals to understand another culture," added Kelly.