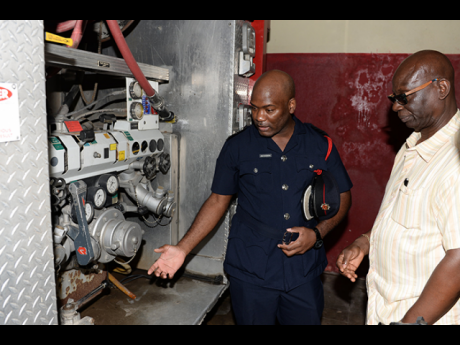 Minister of Local Government and Community Development, Hon. Desmond McKenzie (right), looks on as Superintendent in charge of the Portland division of the Jamaica Fire Brigade, Windell Patterson, points out a compartment in a fire truck used to service the parish. The Minister recently toured local government facilities in the Portland. - JIS Photo

JIS:
Minister of Local Government and Community Development, Desmond McKenzie, says he has given instructions for a review to be undertaken of units used in the delivery of service in rural areas and their suitability for the mountainous terrain.

He said he has asked the Chairman of the Board of the Jamaica Fire Service (JFB) to conduct an evaluation of trucks in service, and for the process to include the rural heads “as they are out there and they know exactly what is happening on the ground.”

“One of the complaints that I’ve gotten since I’ve been here (Portland) from the National Solid Waste Management Authority (NSWMA) and from the fire department, is that because of the mountainous terrain of Portland collecting garbage and putting out fires in many areas pose a severe challenge. So, we have to, in a parish like Portland, look at the kind of units that will be sent to the parish,” he told JIS News.

Minister McKenzie noted that while there is one standard in the trucks that are purchased “there might be a possibility later in the new financial year to examine the option of purchasing new trucks with another standard.”

Turning to the matter of traffic congestion in Port Antonio, Minister McKenzie said he will be revisiting plans to address the issue.

“I understand that there are plans in the Ministry seeking assistance to (address) the congestion in the town. I’m going to take the necessary steps to work with the municipality to ensure that this is done,” he said.

McKenzie pledged full support to the Portland Municipal Corporation in fostering the development of the parish.