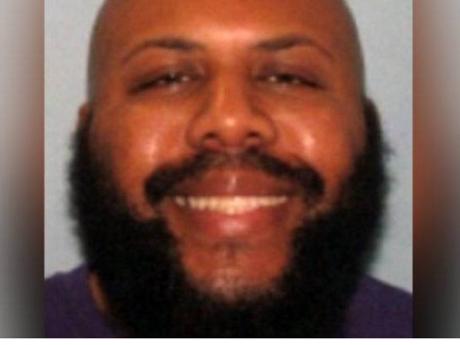 The man suspected of randomly shooting a grandfather on an Ohio, United States then posted video of the killing to Facebook has killed himself.

Pennsylvania State Police tweeted that Steve Stephens was spotted on Tuesday morning in Erie County but after a brief pursuit, he shot and killed himself.

See the timeline below of the events:

11:20 p.m.
___
Cleveland's mayor says the death of a man who randomly killed an Ohio retiree and posted Facebook video of the slaying brings some closure in the slaying of an innocent man.

It wasn't immediately clear where Stephens had been since Sunday.

Authorities say Pennsylvania police got a tip that Stephens was spotted Tuesday morning in a fast-food restaurant parking lot in Erie County, in Pennsylvania's northwest corner. Authorities say police tried to pull him over and, after a brief chase, he killed himself.

Stephens was wanted on an aggravated murder charge in the death of a 74-year-old retired man in Cleveland on Sunday.
___

IN PHOTO: An armoured police vehicle drives through Fairmount park in Philadelphia

10:55 a.m.
Pennsylvania State Police say the suspect in the random killing of a Cleveland retiree posted on Facebook has shot and killed himself after a brief pursuit.

State police say Steve Stephens was spotted Tuesday morning by state police in Erie County, in the state's northwest corner. Authorities say police tried to pull Stephens over and, after a brief pursuit, he shot and killed himself.

Stephens was wanted on an aggravated murder charge in the shooting death of a 74-year-old retired man in Cleveland on Sunday.

He posted video of that shooting on Facebook.
___
9 a.m.
Authorities in Cleveland leading a nationwide search for a man wanted in a random killing that was recorded and posted to Facebook are again appealing to the public for help.

Cleveland's police chief said Tuesday they've received more than 400 tips from as far away as Texas, but so far they've been unable to narrow down the manhunt.

The search for 37-year-old Steve Stephens is entering its third day. He's wanted on an aggravated murder charge in the shooting death of a 74-year-old retired man in Cleveland on Sunday.

The head of the U.S. Marshal's office in Cleveland says he's confident Stephens will be found. But he says these searches can take days, weeks or even longer.

IN PHOTO: Alexis Lee, a childhood friend of Steve Stephens, speaks with a neighbour near Stephens' childhood home in Cleveland, Ohio.
___
8:15 a.m.
A gun range owner says the suspect in a random Cleveland killing that was recorded and posted to Facebook had shot at his facility, and video shows he was warned for breaking rules by practising "rapid fire."

WEWS-TV reports that a video Stephens posted to Facebook last year showed him rapidly firing at targets at the range in Willoughby and being warned to stop by an employee.

Police say the 37-year-old Stephens had a permit to carry a concealed weapon.

The multistate manhunt for him stretched into a third day Tuesday. He's wanted on an aggravated murder charge in the Sunday shooting death of a 74-year-old retiree.

IN PHOTO: Steve Stephens' childhood home, left, is shown as neighbours chat down the street in Cleveland, Ohio, Monday
___
12 a.m.
A multistate manhunt for the suspect in a random killing that Cleveland police say he recorded and posted to Facebook is entering its third day.

Authorities say it's now a nationwide search for 37-year-old Steve Stephens, who's wanted on an aggravated murder charge in the shooting death of a 74-year-old retired man in Cleveland on Sunday.

Videos Stephens shared show him talking about his despair over gambling debts and trouble with his girlfriend.

On Monday evening, Facebook announced that it was launching a review for reporting harmful content following the killing.

The company says it disabled Stephen's account within 23 minutes of receiving the first report about the video of the fatal shooting and two hours after receiving any report.

Facebook says, "we know we need to do better."