Road fatalities pass 100 mark since start of the year 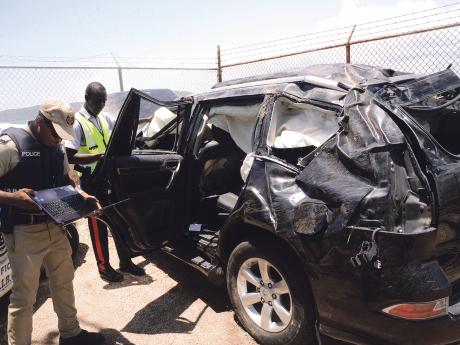 Police investigators at the scene of the Easter Monday crash along the Port Royal main road in which Cecil Prawl, co-owner of Gloria's Restaurant, was killed

The Road Safety Unit in the Ministry of Transport says up to yesterday, the country recorded 101 road deaths from 94 crashes.

The Unit notes that 10 of those fatalities occurred over the Easter Weekend pushing to 18 the number of deaths for the month of April.

However, road fatalities have decreased by 21 per cent when compared with the similar period in 2016.

Fatal crashes have also decreased by 12 per cent and

Director of the Road Safety Unit, Kenute Hare, says speeding was a factor in the crashes.

According to Hare, many of the fatalities could have been prevented had the victims were wearing their seat belts.

He insists that a properly worn seat belt increases by up to 50 per cent, the prospect of surviving a crash.

Meanwhile, motorcyclists account for 29 per cent of the road users killed since the start of the year.