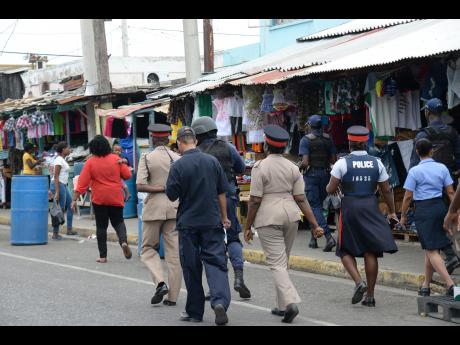 Jermaine Barnaby
Police on a walk through of sections of downtown Kingston last Friday. 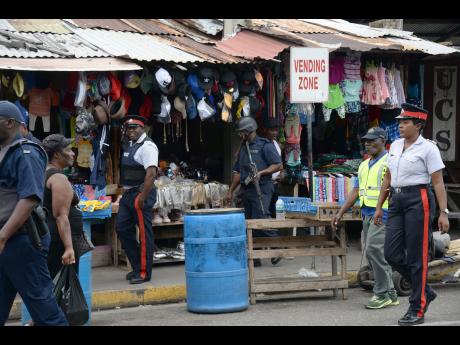 Scores of vendors in a section of the downtown Kingston market district, dubbed 'Back Market', are packing up their goods and leaving their stalls, defeated and dejected, as a band of robbers make their lives hellish.

Last Friday, a group of senior police personnel from the Kingston West Division walked through the Back Market area around Darling Street, trying to allay the fears of the vendors who have not yet relocated.

But even as the cops flashed reassuring smiles and did fist bumps with persons outside the market, inside, higglers hissed and cursed as they told our news team of several robberies which they said have left them on the edge.

Juice vendor Ann-Marie Boothe is among the latest to suffer at the hand of the criminals. Last Tuesday, her shop was broken into and ransacked by the hoodlums who made off with a refrigerator which was packed with items she had hoped to sell.

"Is four fridge me have and them come and just lift out one of them. It full of juice and meat and them take away all the juice them and half of the meat and dash the rest on the ground," said Boothe, as she recounted the smell of rotting meat which greeted her when she turned up to open her shop.

"Is through the top (roof) they are going, no matter what we do. I don't know is who. It must be the boy them from around the area. Is a whole heap of people place they are breaking into," added Boothe.

She argued that reporting incidents to the cops almost always amount to nought as the criminals seem to be aware of the movement of members of the security forces during the wee hours of the night.

Like the many other vendors who have left a section of the usually busy market desolate and abandoned because of the thieves, Boothe opted to relocate to another location nearby where the thieves have not yet struck.

"Is five nights in less than a week them break in here this month. Say them bruk it the Thursday, them bruk it the Friday, the Saturday, the Sunday. Then them go again the Tuesday and again the Wednesday, for example," said a shoe vendor who gave his name as Kevin, as he pointed to a storeroom he and others share.

"It don't really make any sense we report it because they (police) rarely catch the guys them; and sometimes it look like they are afraid to patrol inside the market," said Kevin.

He told our news team that two thieves who were caught in the act by the cops last October are the only ones arrested so far.

"I can't feel good about this. Is protection we want around here," offered Dave Wright, who has been selling in the market for about 15 years. "The place really cannot work like this."

Last Friday, Jacqueline Henry, deputy police superintendent for the Kingston West Division, told our news team that while the complaints of theft are not new, there is not much for the cops to act on as the higglers refuse to make formal reports.

In a plea to the vendors, Henry reminded them that only with formal reports can the police construct cases that will facilitate arrests and convictions in court.

"We patrol the market all the time. The higglers can tell you. We even have covert police walking through the market. The truth is that we are not made aware when these things happen," said Henry.

The walk-through of the downtown Kingston market district by the senior cops last Friday came in the wake of reports that one Coronation Market vendor was robbed of more than $200,000 during two incidents recently.

Last Thursday, cops on patrol also intercepted a group of armed men who were reportedly headed to the market to prey on the vendors.

Abuse of the homeless rears ugly head
Problems in St William Grant Park - Hospital data shows several serious crimes not reported to the police
Supreme squatters - Building overlooking court’s parking lot in downtown Kingston captured
Extortionists or helpers? - Motorists fume over being charged to park on the streets of Kingston but the men who charge say they are offering a service
Dons want in - Downtown Kingston area leaders call meeting to discuss role in redevelopment