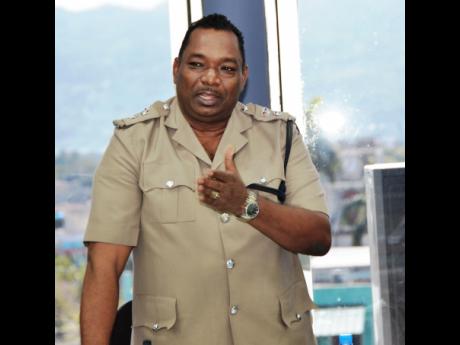 With St James continuing to bleed at unprecedented levels, the crime threat facing the parish was underscored last Friday when the police seized a shipment of eight guns and more than 1,000 rounds of assorted ammunition at the Montego Bay Wharf.

In a stern voice, mixed with trepidation and relief, Senior Superintendent of Police Marlon Nesbeth, the commanding officer for St James Police Division, broke the news of the guns and ammunition find to The Sunday Gleaner shortly after 9:30 p.m. last Friday.

"We had reason to be suspicious about the contents of two barrels that had arrived at the wharf from Fort Lauderdale," said Nesbeth.

"After careful examination and a search of the contents of the barrels, we found eight firearms - one high-powered rifle, a shotgun and six handguns, alongside 1,046 rounds of assorted ammunition," added Nesbeth.

The guns and ammunition find marks the second time since the start of the year that the police force, through its border security strategy, has seized illegal weapons at the Montego Bay Wharf.

In the first incident, two guns were found and two men arrested and charged.

But despite the major guns and ammunition seizure, it was still not a good week for the police in St James as gunmen continued to wreak havoc across the parish.

In two brazen incidents, a wheelchair-bound man was murdered in the section of the parish known as Melbourne, while another man was killed execution-style in the cemetery at the Dovecot Memorial Park.

The wheelchair-bound man was subsequently identified as 53-year-old Devon Calvin of a Quarry address. Reports are that at approximately 11:35 a.m. last Wednesday, heavy gunfire was heard along a section of the Salt Spring main road. Calvin was subsequently found dead with multiple gunshot wounds.

"Dis is a everyday thing ... the guns dem nuh stop fire and people nuh stop dead. Morning, noon, and night a just shooting, shooting," an elderly resident told The Sunday Gleaner in the aftermath of the incident.

"As the Bible seh, in the last days the hearts of men will get desperately wicked. I am just mourning ... bawling out for Montego Bay," added the elderly resident.

In the incident at Dovecot Memorial Park, which took place shortly after 11 a.m. last Thursday, mourners who were attending the funeral of Carlton Hopwood, a barber, who was found dead in the Rosevale community last month, were forced to flee in panic after two men alighted from a motor car, firing shots.

When the shooting subsided, it was discovered that Alando Sawe, who is of a Spot Valley address, was dead. He was said to be a friend of the man who was being buried.

With the killing and general mayhem back at crisis level in St James, Gloria Henry, the president of the Montego Bay Chamber of Commerce and Industry, told The Sunday Gleaner last Thursday that the chamber will be seeking an urgent meeting with the new commissioner of police, George Quallo.

"We just completed a crime study which shows some of the activities that are happening in the different areas and we are going to release it next week. It shows the economic impact that crime has had on the parish and, by extension, the country, which is significant.

"So we are expecting that we will see some results from the new commissioner, and of course, an improvement in the policing strategies generally, which need to be modernised," said Henry.

St James led the nation in murders last year with a record 268 killings. While the police have had some success, especially in wiping out six members of the notorious Ski Mask gang in a major gunfight, gangsters continues to pose a significant challenge, as with more than 70 murders - the most in any police division since the start of this year - the parish is a virtual war zone.