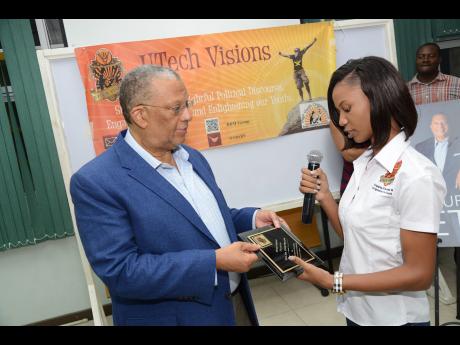 Opposition Leader Dr Peter Phillips has declared that Jamaica needs better politics to rebuild trust and not one rooted in tribal divisiveness, where state funds are used to advance narrow political views.

Phillips made the declaration as he addressed students at the University of Technology (UTech) last Thursday.

According to Phillips, for Jamaica to grow and prosper in the 21 century, it has to get rid of the narrow-minded, self-serving style of politics.

The students were attending the first of a series of listening sessions being organised by the opposition People's National Party (PNP), designed to engage a wide cross section of Jamaicans in realising the vision of a better Jamaica for all.

In addressing the students, Phillips said he is preparing the PNP for when it forms the next government, to deal with issues affecting all Jamaicans, such as in the health sector, of land ownership and education.

He said he has learnt from the mistakes and the successes of the past and does not plan to repeat them.

"We have made errors collectively and as individual politicians, and I have learnt from these lessons. One of the mistakes we made was to think that we could build a better Jamaica on borrowed money. We can't borrow to gain prosperity," said Phillips.

He told the students that the PNP will create an economic environment that would allow the government to guide investments into the sectors that are neediest.

"There are certain realities that we have to put behind us - the fact that it cost too much for health services - x-ray machines break down at hospitals, and plus indignities some suffer while waiting in line for treatment," said Phillips.

The PNP president said one vehicle to achieving economic success is the formalisation of lands that persons are already living on or using for agriculture.

"There are people residing on lands for 30-40 years living with fear, terror that one day someone may come and say this belongs to me. Forty per cent of the lands used for agriculture are untitled. So those farmers can't go to the bank to get money to modernise their operations," added Phillips.

Speaking on education, Phillips said that there is need for greater collaboration among teachers, parents, students and communities to deliver better education to pupils leaving high schools.

He promised to work with stakeholders to provide the basic high standard of education in secondary schools.

"It therefore means that more money may be spent at the secondary level in the first instance to make sure they get the basic; then we can move on to tertiary level where we can make it a right of students to have that level of training, which means university education for free as long as you qualify to do so," said Phillips.