Pastor calls for security forces to be courageous in fight against crime, corruption 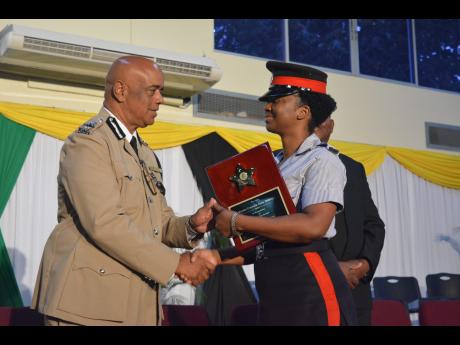 Nigel Coke
Newly appointed Commissioner of Police, George Quallo (left) congratulates Woman Corporal Lesia Mullings of the Area 3 Headquarters on her achievement during the 17th annual Prayer and Thanksgiving Service for the Security Forces hosted by Northern Caribbean University at its main campus in Mandeville, on Saturday, April 22, 2017. 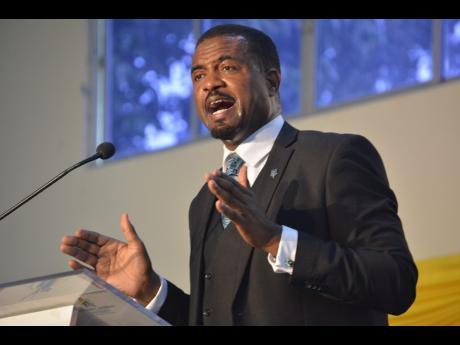 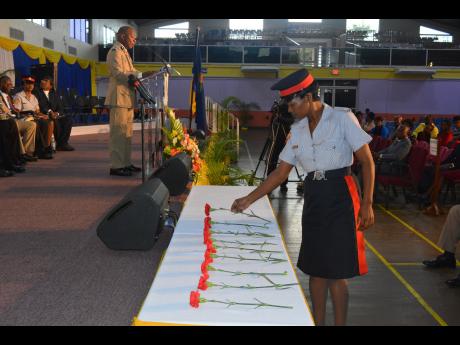 Nigel Coke
Woman Corporal Keisha Bell of the Clarendon Division of the Jamaica Constabulary Force (JCF) lays a rose in remembrance of one of her 36 colleagues who died over the pass year from February 2016 to March 2017 in the line of duty during the 17th annual Prayer and Thanksgiving Service for the Security Forces hosted by Northern Caribbean University at its main campus in Mandeville on Saturday, April 22, 2017. Standing at the podium is ACP Gary Buddoo Fletcher, Chief Chaplin of the JCF. (Photo by Nigel Coke
1
2
3

Pastor Nevail Barrett, Sabbath school and personal ministries director of the Seventh-Day Adventist Church's central region, is challenging members of the Jamaica Constabulary Force at all levels to be a Daniel of the Bible and stand up, stand out, and speak up in the fight against corruption, crime, and violence.

However, as he referenced the book of Daniel, Chapter 6, he pointed out to them that their battle was twofold: against hardened criminals and even some unscrupulous colleagues.

"Our nation needs people of honour, people with the right attitude who put God first and people after," said Barrett.

"Members of the security forces, the Lord has placed you in your line of duty, which requires honesty, loyalty to duty, and integrity in word and deed, and He has equipped you with the skill set to deliver. Sometimes it is hindered by human interference, but you have got to live right and set the right example."

Barrett was delivering the main Divine Hour message during the Northern Caribbean University' 17th Annual Prayer and Thanksgiving Service for the Security Forces, held on Saturday at its main campus in Mandeville under the theme 'Courage Brother: Do Not Stumble'.

He said that some of the things that drive crime and violence in the minds of men are position and power and money, but "all of that is vanity and vexation of spirit. I commit you officers to God because at times, you have to fight from the inside out, and your job becomes more difficult.

"People will try to destroy you because of your morality, your stand for righteousness, honour, and because they think you are getting in their way. I am sure these are the things that many of you officers have to deal with. Many want you to compromise your principles and the law, but you have to stand up for God."

Newly appointed Commissioner of Police George Quallo and other members of the security forces have been assured that God will be watching over them and protecting them from enemies on all sides.

Said Barrett to the congregation: "Your job is challenging because you have to deal with the people in your work environment who want to see your back, and then you have the enemy out there that you have to fight. But I want you to know that the eyes of the Lord are upon you. Go in the name of Jesus."

Thirty-six former members of the Jamaica Constabulary Force (JCF) who died either naturally or in the line of duty were remembered during a rose-laying ceremony chaired by Pastor Gary Buddoo Fletcher, chief chaplin of the JCF.

Also, eight JCF members from across Area 3 were recognised by the Northern Caribbean University for their service to the communities in various capacities.