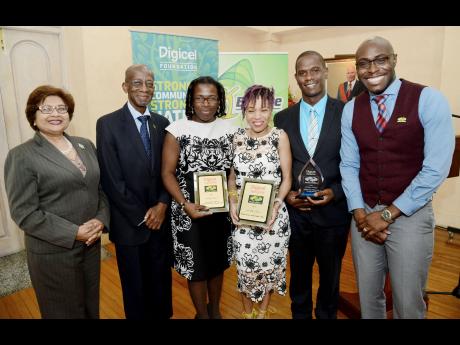 The Princesses and Ladies Incorporated, an Illinois-based non-profit organisation in the United States with membership in Jamaica, Cayman and Sudan in Africa, has made a significant impact in the Digicel Face of Change competition, securing second position for their efforts in impacting the lives of a number of young girls through its mentorship and support programmes.

Simone Francis Grant, a member of the Princesses and Ladies organisation, told The Gleaner that the group works with young girls in various communities, some in state care, to ensure that their basic needs are met and to encourage, motivate and mentor them as they strive to achieve their goals.

"We work with two girls' homes and there are some girls who still have a far way to go, but there are others who are really trying. The grades are a bit better, we have seen success stories," Grant told The Gleaner on Friday during an interview at King's House, where the awards ceremony was held.

In addition, the mentors of the Princesses and Ladies group visit with the teachers and parents of their mentees on a regular basis to monitor their performance at school, at home and in their communities.

In saluting the finalists, Jean Lowrie-Chin, chairman of the Digicel Foundation, said many of the participants were from humble circumstances but they did not allow that to prevent them from giving of themselves and inspiring their respective communities.

"Your initiatives are a signal to those who use poverty as an excuse for crime that there is always a moral and constructive way out of our difficulties," she reasoned.

The Digicel Face of Change competition celebrates and rewards the work of grass-roots community organisations and is endorsed by the governor general's 'I Believe Initiative'.

There were 21 finalists in the competition and Jamaicans were given the opportunity to vote for the winners on social media.