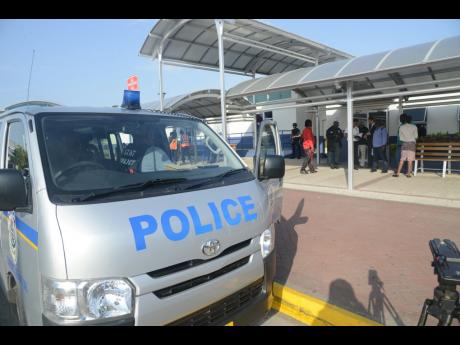 Norman Grindley
A Jamaica Constabulary Force vehicle at the Norman Manley International Airport police post in Kingston waits to transport the eight alleged lottery scammers to the tarmac for extradition.

UNITED STATES (US) Ambassador to Jamaica Luis G. Moreno today delivered an ominous warning to Jamaicans who are involved in the lottery scam.

Moreno revealed that a special taskforce established by US authorities to crack down on the advance fee or lottery scam has "thousands of cases under investigation".

"Expect hundreds of extraditions," declared the top American diplomat in the island.

The warning comes as local law enforcement personnel are getting ready to hand over eight Jamaicans to their US counterparts at the Norman Manley International Airport (NMIA) in Kingston.

The five men and three women, including police constable Jason Jahalal, are wanted in the state of North Dakota on a 66-count indictment.

Prosecutors in North Dakota charge that they were part of a criminal organisation, led by another Jamaican, Lavrick Willocks, that used an advance fee or lottery scam scheme to fleece nearly 80 elderly victims out of  US$5.6 million.

The eight alleged scammers were reportedly taken from two penal institutions in the Corporate Area before daybreak and transported to the police station at the NMIA.

A handful of heavily armed police personnel are now standing guard outside the police station.

"Today's extradition demonstrates that these criminals will face justice, whether in a Jamaican high court or through the American federal system," Moreno underscored.