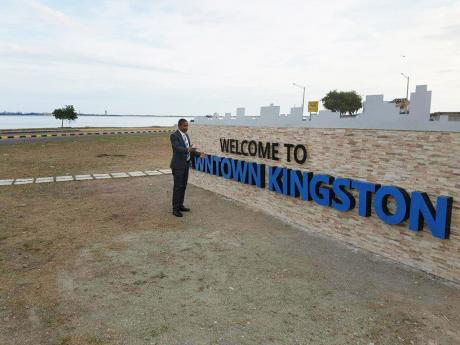 Mayor of Kingston & St Andrew Delroy Williams posted this photo on his Twitter account with the caption: 'If we restore the pride, half the work is done. Let's keep our city clean. – Via @MayorWilliamsJA Twitter account

The Government has again placed the downtown Kingston Redevelopment Project on the front burner declaring that the groundwork had commenced with the completion of the project document outlining its rationale, framework and road map.

Daryl Vaz, Minister without portfolio in the Ministry of Economic Growth and Job Creation, said the five-year pilot project has the potential to be a game-changer in the economic life of downtown Kingston and Jamaica.

He stated that the re-scoped and expanded project could represent as much as three per cent gross domestic product in new economic activities.

In his contribution to the Sectoral Debate in Gordon House yesterday, Vaz said the project, which is almost fully funded by the private sector, would impact the Coronation Market and Lifestyle Centre.

Daryl Vaz, Minister without portfolio in the Ministry of Economic Growth and Job Creation

He argued that rather than focusing on negatives the intent is to mobilise underutilise and distressed assets in downtown communities and commercial districts.

Vaz said the pilot will see the Office of Utilities Regulations granting a five-year experimental governance and regulatory framework with utility companies, among other things.

He said the Jamaica Social Investment Fund will serve as the project coordinator with oversight by the Urban Development Corporation and the Kingston and St Andrew Municipal Corporation.